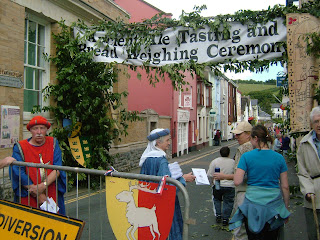 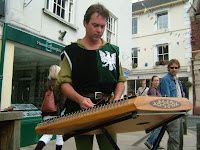 On the third Saturday of every July, Ashburton 'goes medieval' . Men in sackcloths and women in wimples take to the streets as part of the ancient ale tasting and bread weighing ceremony which goes back centuries. I came across a chap called Woody who was standing on a street corner playing his hammered dulcimer which he told me originated in ancient Persia but was played regularly in medieval England. Then there were the Grimspound Morris Men who were dark and Dartmoorish. 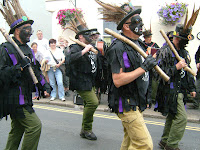 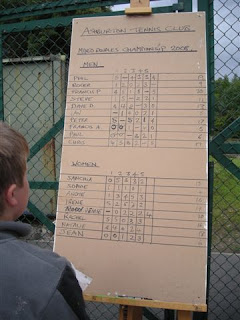 It could hardly be described as the town's sporting event of the year, but Ashburton's tennis tournament was in its way a minor triumph. The club is so laid back it's practically horizontal, so the fact that eighteen players got together on the same day, played some matches, and ended up with a rather thrilling final, was frankly remarkable. It was good-natured fun, with just the teensiest competitive edge.
Posted by Sophie at 18:42 No comments: 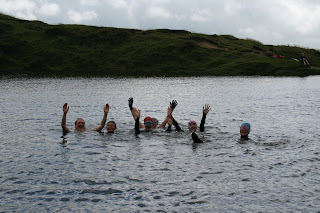 "A lido on the Moor" is how one friend described Crazy Well Pool. When we got there after a thirty minute uphill hike, we found a black, rippling pool surrounded by Dartmoor sky. There was a sense of strangeness, indeed otherwordliness, perhaps because of its isolation and the darkness of its waters. It also has no apparent reason for its existence; no water runs in or out. It was perfect for swimming. Backstroking gave a wonderful view of the larks overhead, and the constantly changing skies.
Posted by Sophie at 11:44 No comments: 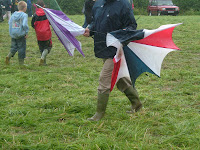 'Tis a truth universally acknowledged that on the day of the school fayre the rain shall pour and the gales shall howl. Actually it isn't - last year it was so hot that all the icing on the cakes melted. This year though, the weather WAS truly horrendous., with driving winds and curtains of rain. As the jazz band continued to play, it felt like the last hours of the Titanic.
Posted by Sophie at 08:34 No comments: