The clocks had gone forward, and I was a little worse for wear after the unexpected antics of the night before, but the day dawned sunny and fine and it was gorgeous by the time we got to Hope Cove.  We laid our blankets out on the golden sand and looked out at the pavement of rocks spreading before us: it was a very low tide and it was interesting to see the full extent of the rocks that you don't even realise are there when the water is further in.  We set off around the headland towards Inner Hope but after a short time I noticed a tell-tale black blob in the water. Seal alert!  We turned around and swam towards Thurlestone, swimming over huge ribbons of kelp that were glistening in the sun, and passing some stand-up paddleboarders.  We then entered a 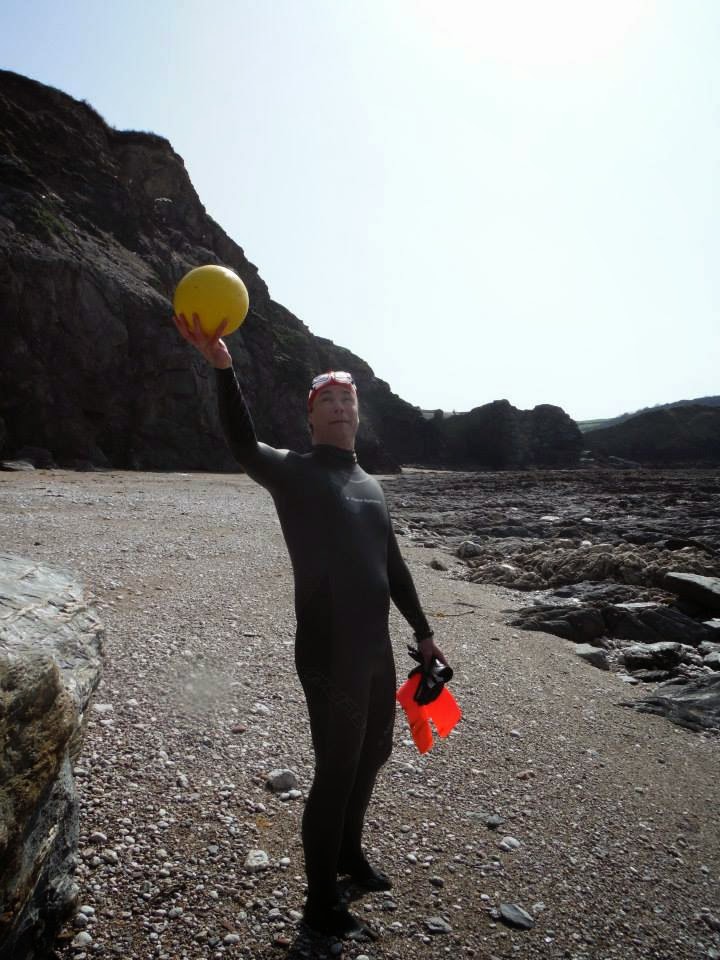 lagoon in front of a what felt like a desert island beach, and dragged ourselves over stones and boulders to come out on the virgin sands.  Allan spotted an 'upstairs' cave up the cliff, which, naturally, we climbed up and explored, before wandering back along the beach, doing a bit of beachcombing and litter-picking.  The perfect potter. Thanks to Allan for the buoy picture. 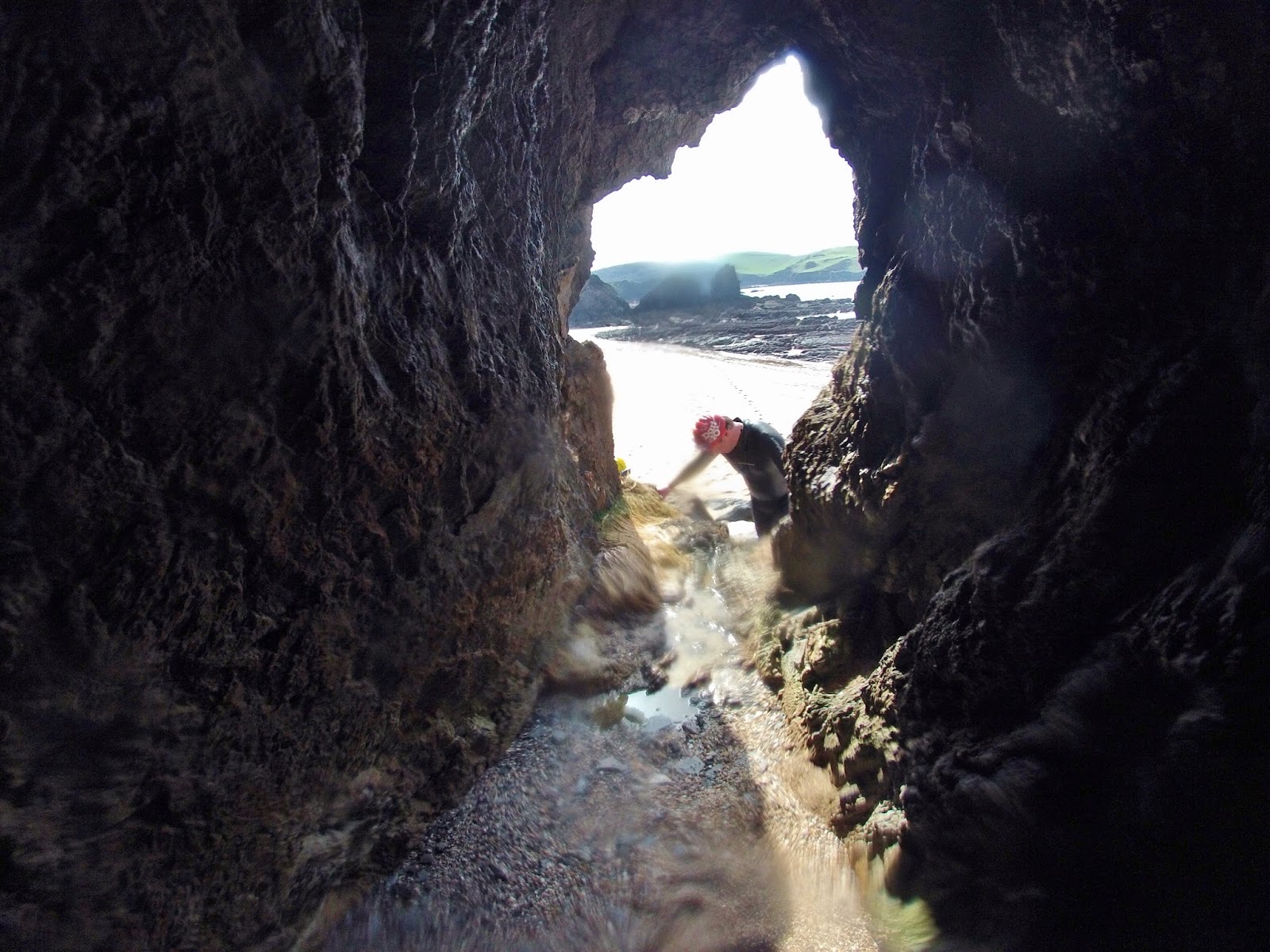 Another world at Westcombe 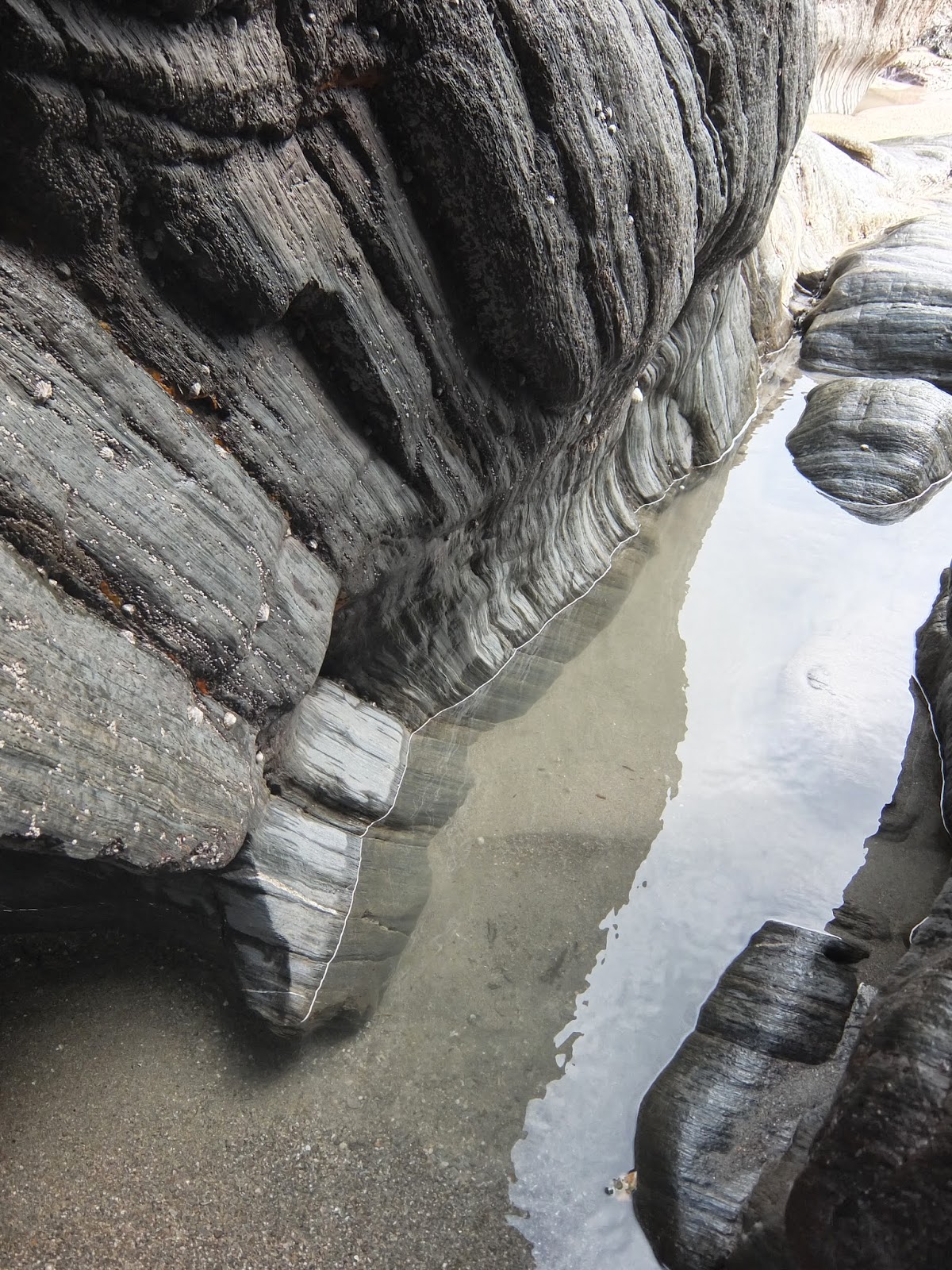 Westcombe Beach is a short distance from Bigbury but could not be more different.  Instead of crowds, kids and ice creams, you find an altogether different place: a maze of muscular rock formations with unexpected pools, arches and caves.  There is an overwhelming impression of steel, slate and silver; the rocks feel alive and a little forbidding.  Great stripes of colour rise above you at stark angles, in contrast to many feminine shapes: smooth basins in the rocks like fonts full of holy water.  We wandered for ages, climbing through holes and caves, until eventually we came to a secret beach where the sun was beating down on the flat slate walls of the cliffs around us.  We stripped off and dipped in a nearby pool while the waves crashed nearby.  A perfect afternoon. 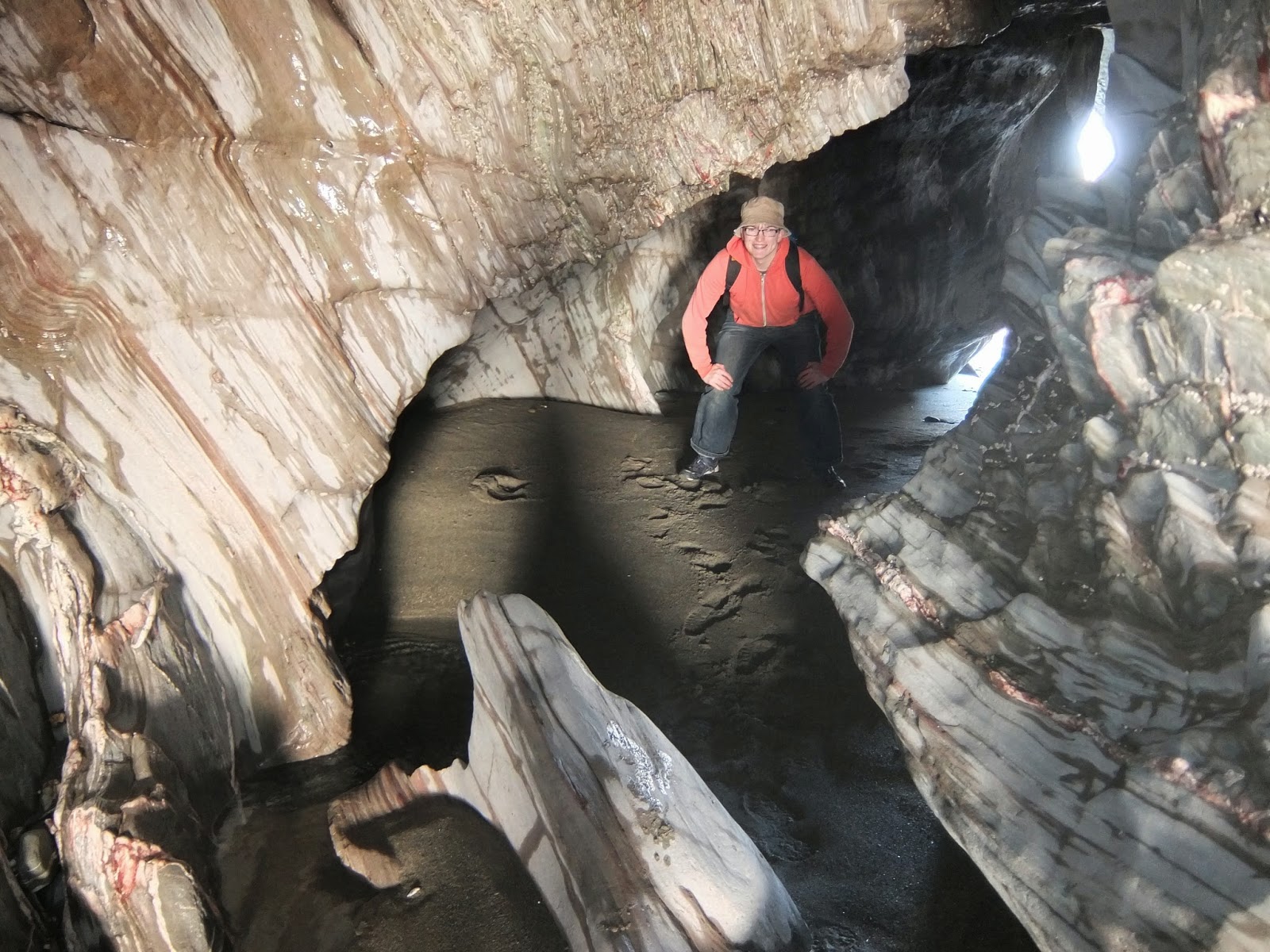 From Stone Age to Sci-Fi 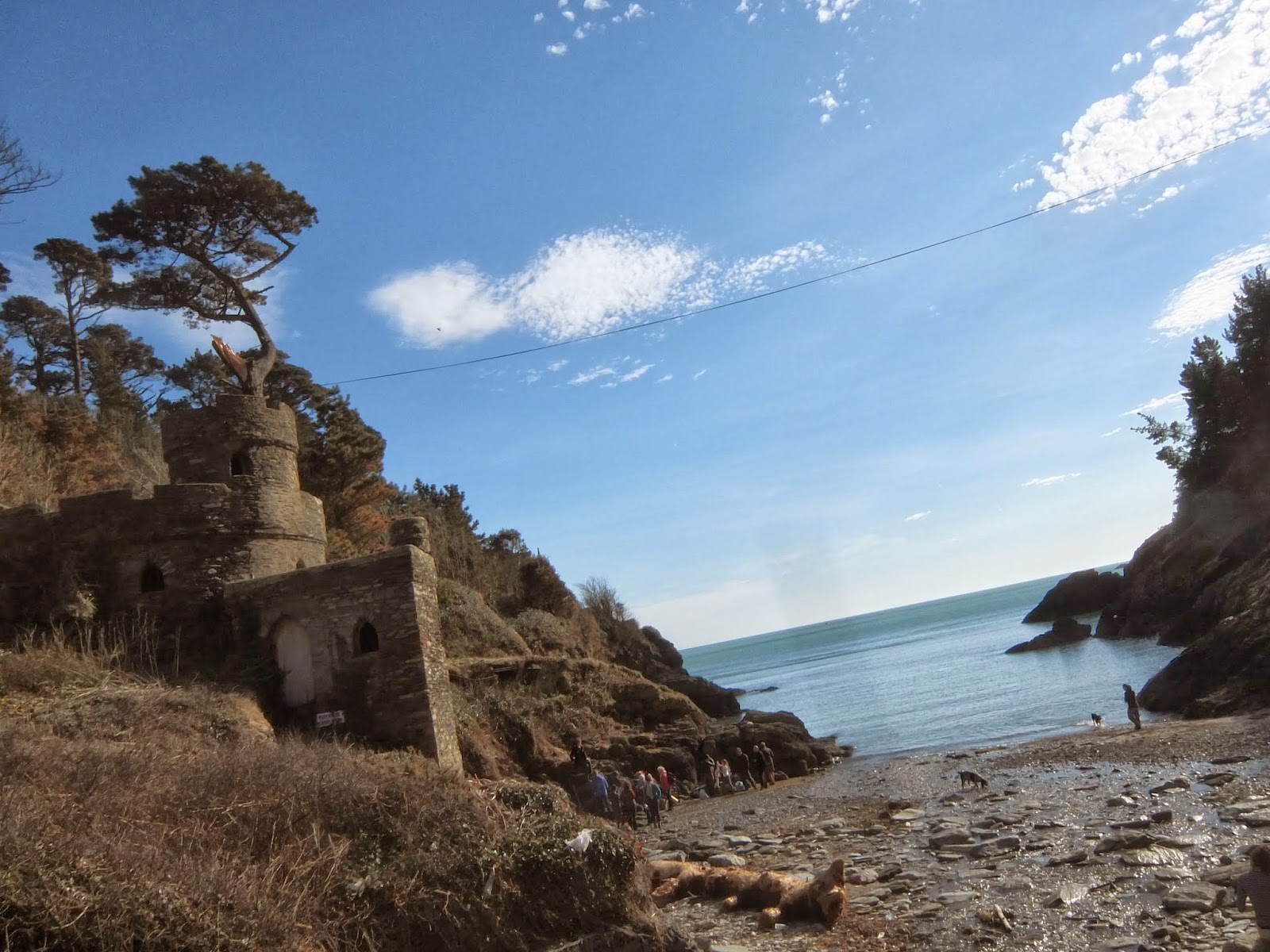 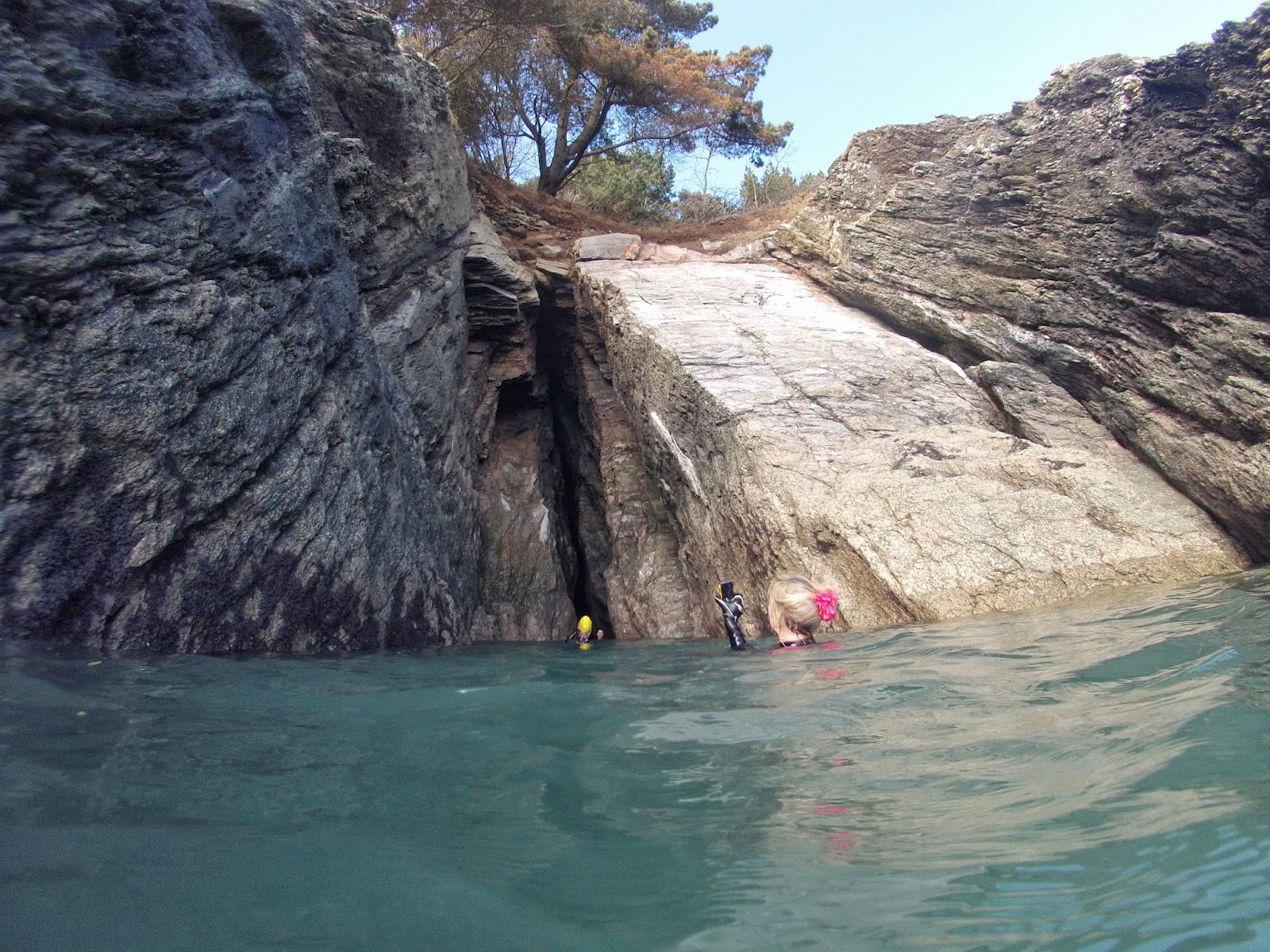 I love discovering new places.  Today it was Mill Bay, a cove near Kingswear.  Richard had kindly organised the swim, and we were meeting by the post office in the village. Simple enough you might think, but there was the usual faffing about as we all tried to find each other, not helped by diversions and footpath closures.  Mark came up with the perfect collective noun: a dither of wild swimmers.  Eventually we all set off, with the pine-green waters of the Dart estuary glittering below, past increasingly grand houses festooned with palms and exotic plants.  Mill Bay was a revelation.  A u-shaped cove with a strange gothic building, which apparently was first a limekiln, then a mill, and finally a boathouse.  The sea was enticing.  It was flat calm and dappled with light, with glimpses of water through channels and interesting looking rocks.  Richard led us just a short way into the bay before disappearing off to the right.   We followed, and found ourselves swimming into an acute triangular cave which then opened out into a massive cavern before leading to another cave and out the other side.  We felt like cavemen and women, blundering around in the dark at the heart of the cavern, before slipping back into the water and swimming out to the light.   Looking back at the entrance to the second cave from the sea, it was just a slit in the rocks; you wouldn't imagine you could swim in. I've decided to call these the Tardis Caves. Thanks to Richard for a brilliant adventure. 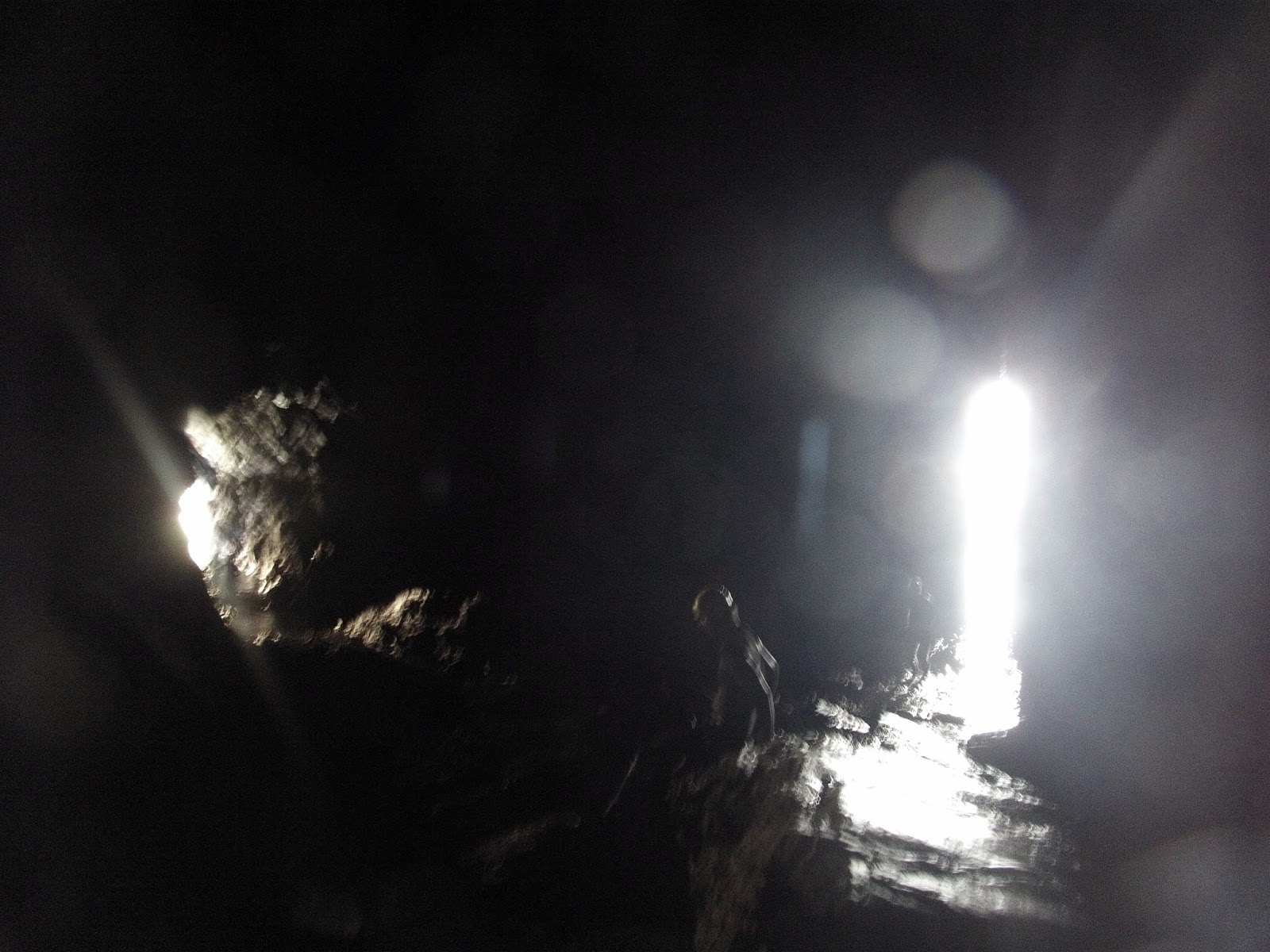 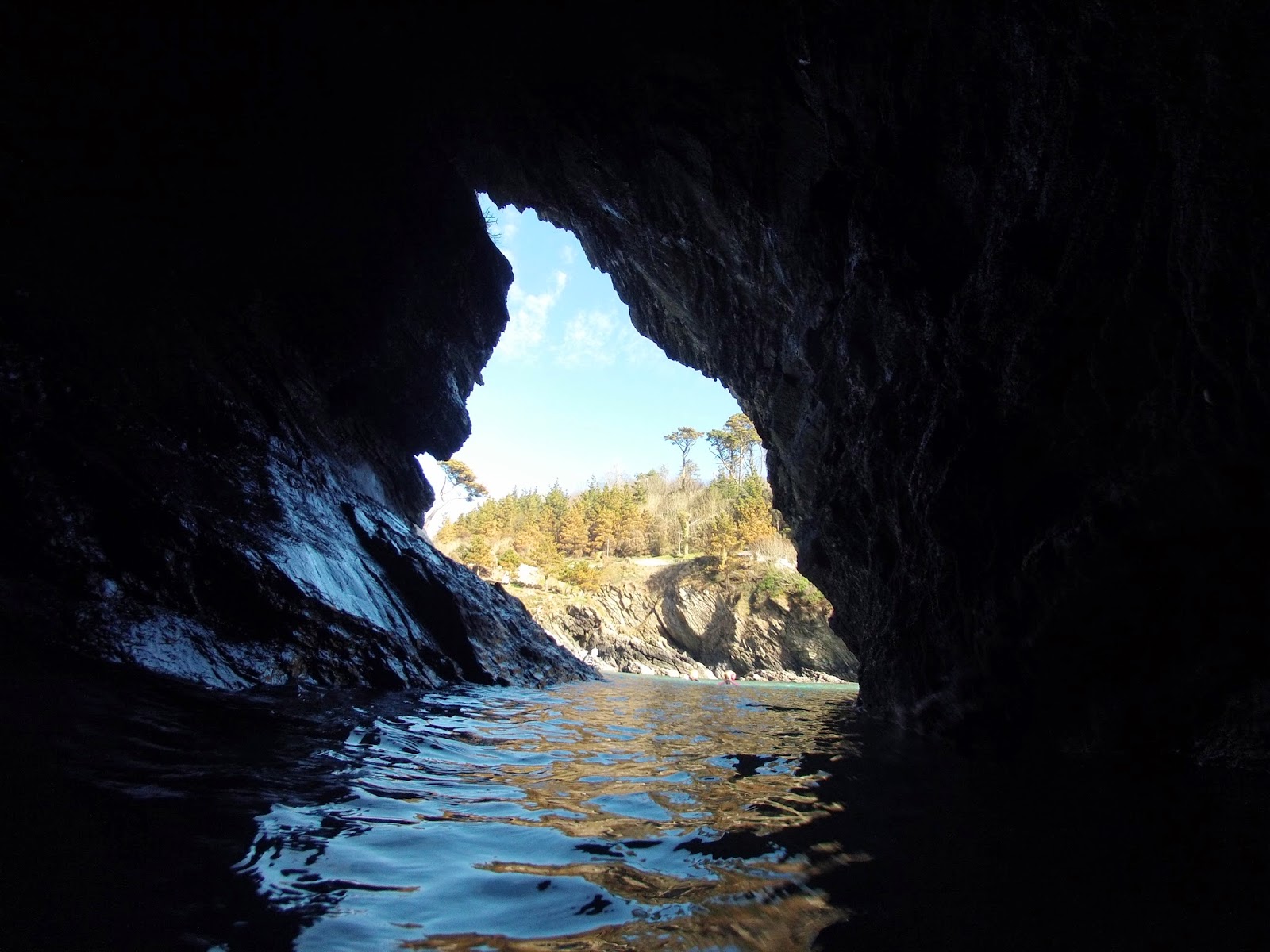 And it's all in aid of charidee 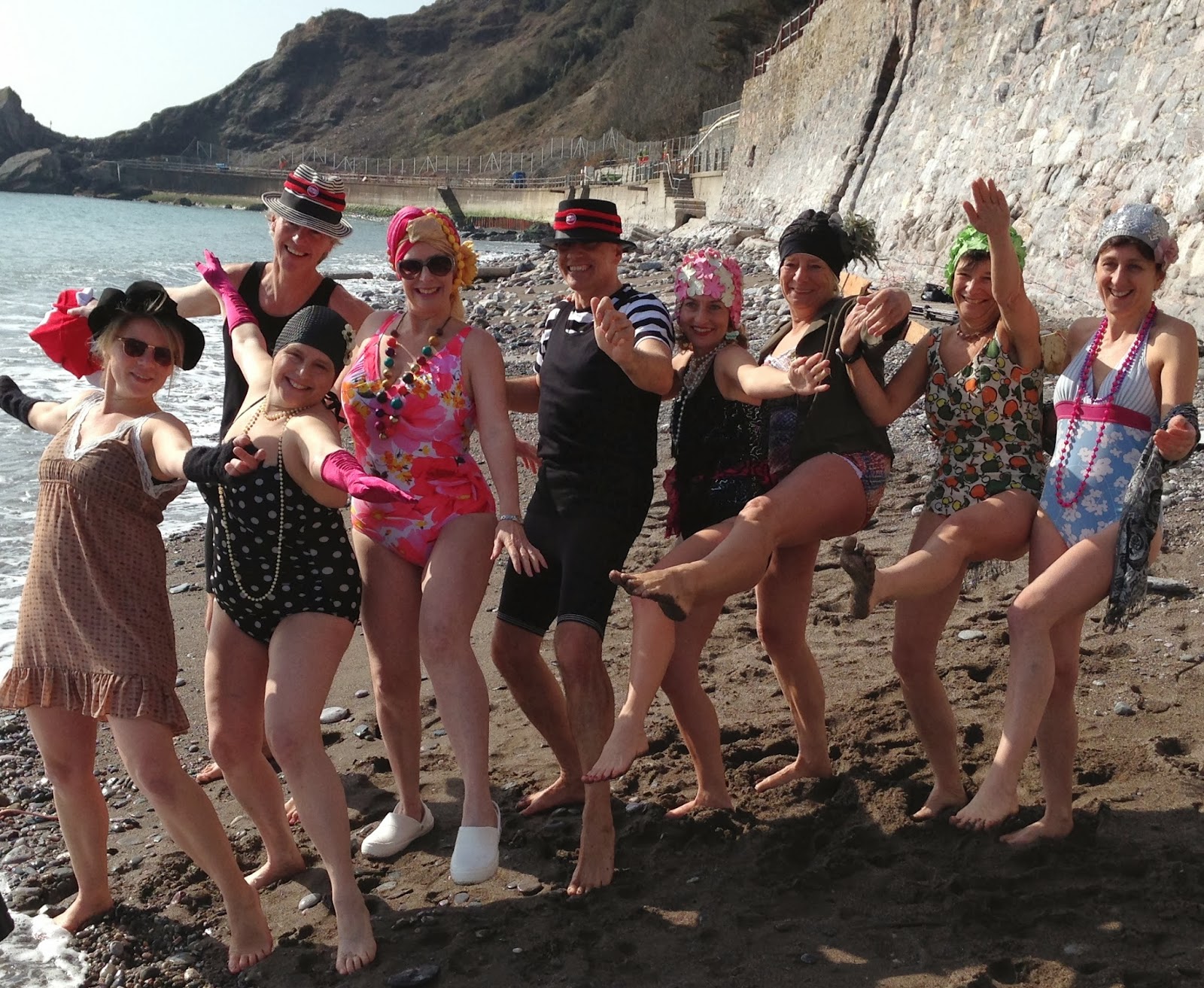 You don't have to have an excuse to dress up and make a fool of yourself on a British beach in March, but it helps.  I'd been asked by Sport Relief to put on an eye-catching wild swim to raise awareness of the cause, and so came up with the idea of recreating one of Agatha Christie's favourite childhood dips.  The famous author grew up in Torquay and used to like swimming off Meadfoot Beach out to Shag Rock, a small island a few hundred metres off the coast.   So ten of us dressed up in vintage swim gear, Steph brought a wind-up gramophone, and we generally cavorted around on the beach before changing into more suitable attire for the actual swim.  The telly came, the papers loved it, and we all had an absolutely spiffing time.   The swim itself was amazing; clear blue sea, bright sunshine like a spotlight on the island, and a sense of achievement as it actually felt like quite a distance after the short swims of the winter. 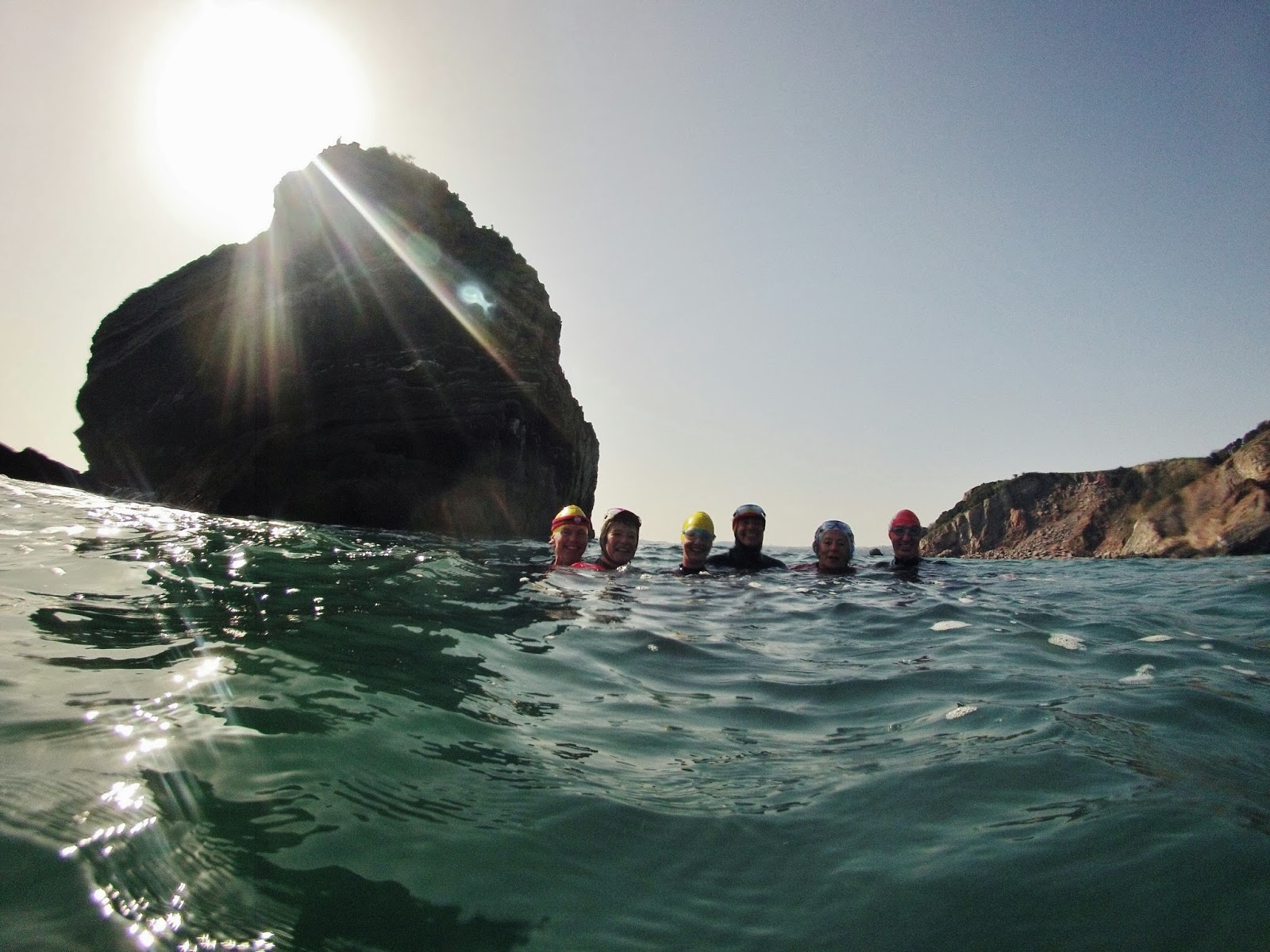 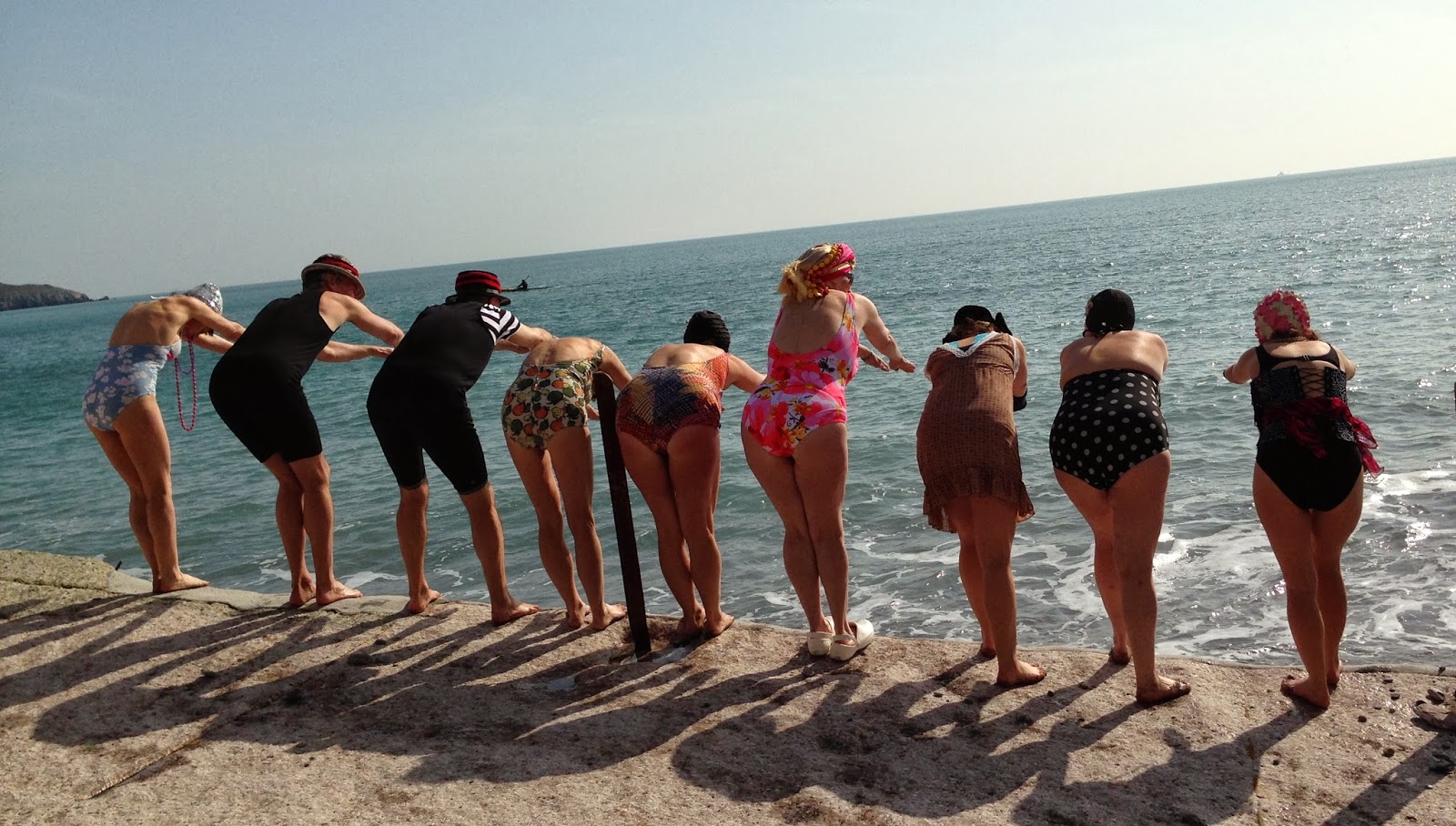 
We weren't feeling quite up to a complete swim around Burgh Island, so decided to go and have a swim in the Mermaid Pool instead.  The storms have taken their toll - there was a huge hole in the wall which keeps the water in.   The pool was a shadow of its former self - more of a puddle in fact...with the diving platform standing on a sandbar. No storing the lobsters under there for the moment.   We swam and walked to the other side where there was deeper, greener water.  We could see over to the beach where there was a big pile of breeze blocks, so touchwood the hotel is going to mend the wall.
Posted by Sophie at 07:53 No comments: 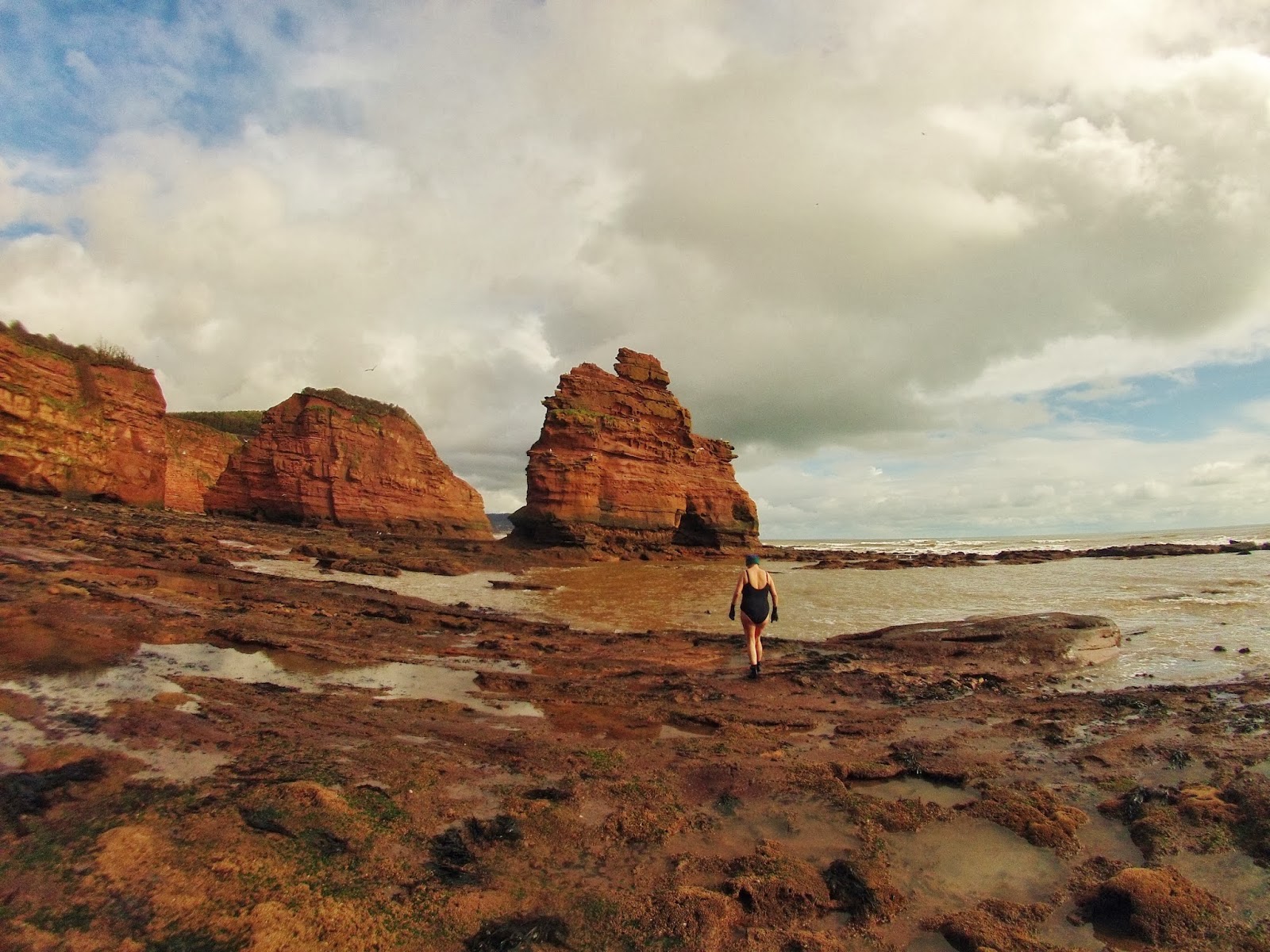 It felt like a disaster movie or the Lost World.  As we rounded the corner of Ladram Bay, to get to the sea stacks, it turned out there was no need to swim.   Someone had pulled the plug out and all the water had disappeared, leaving the normally hidden sea bed exposed, and revealing exotic shapes and colours in the sandstone.  We noticed beautiful soft honeycomb patterns underfoot, made out of sand and very fine shell.  Later we discovered they were living reefs, home to the tiny honeycomb worm.  We wandered around in awe.  It was pure chance that we'd come on this day at this time, which was actually on one of the lowest spring tides of the year, so it felt very special to be able to see this landscape which is so rarely revealed.  We had a dip on the main beach on our return, where there was still some water left.  Three years earlier we had swum around the towers at high tide, now we were walking round. That is one of the things I really love about sea swimming; you return to the same places and have a different experience every time. 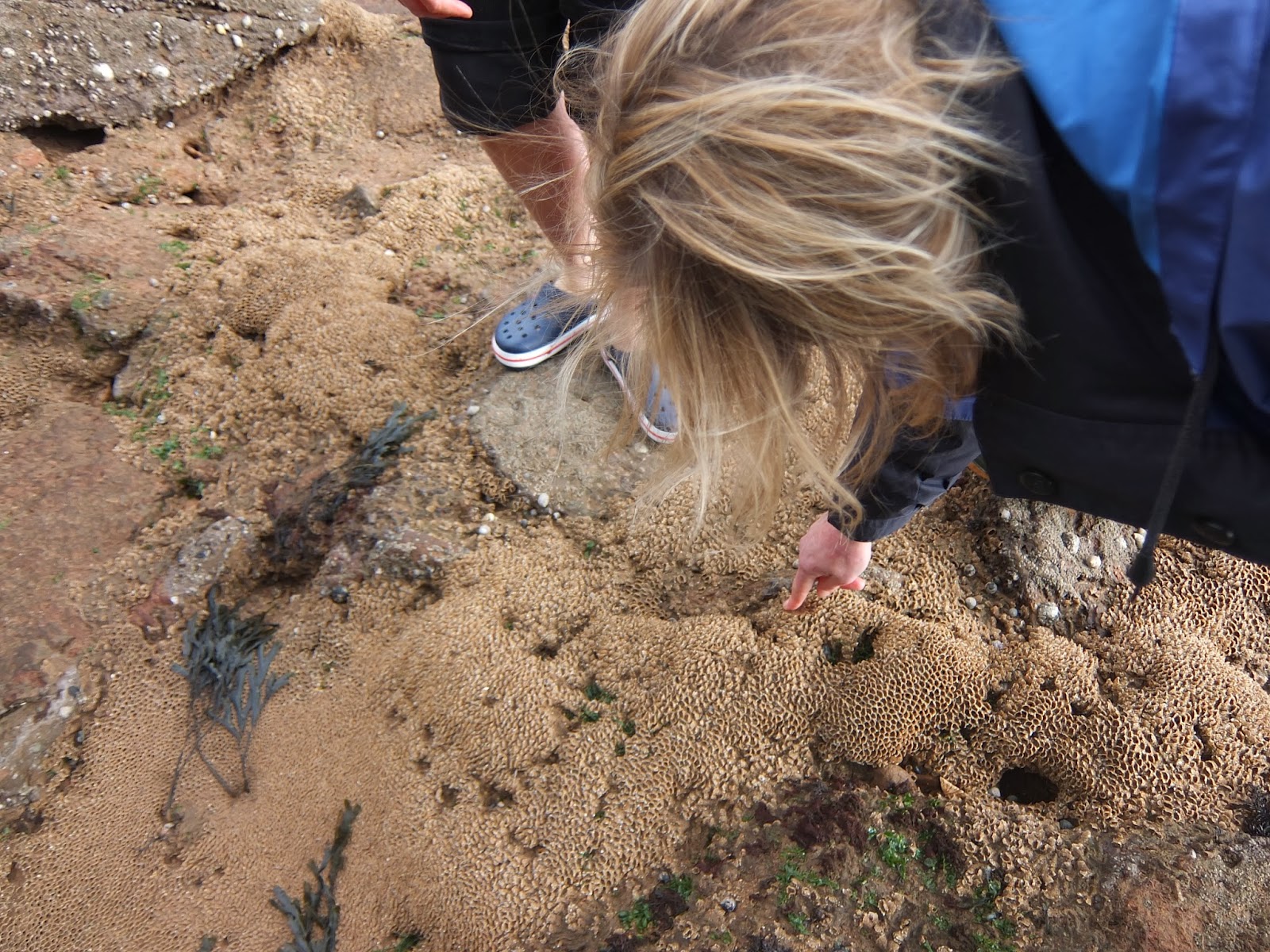 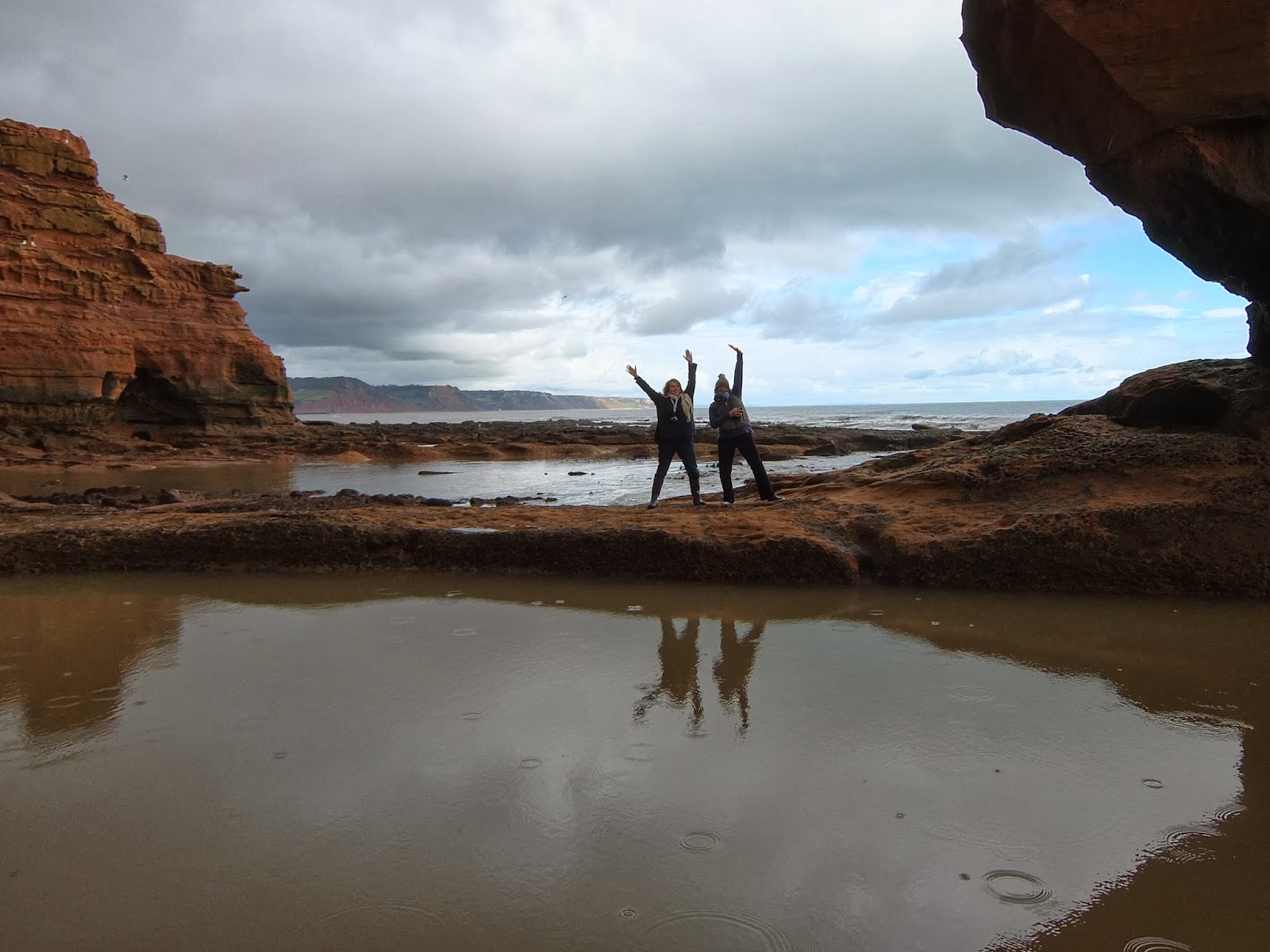 Stuck in the mud

Anna and I set off for an impromptu Saturday afternoon dip, and decided to try downstream of Dartmeet. It was incredibly boggy walking along beside the river, and we were in the middle of a rather interesting conversation about water tables when my left leg suddenly disappeared into the bog, right up to my hip. "Don't move!" cried Anna (as if I could).  "This will make a brilliant picture."  Well thanks dear friend. To be fair she didn't actually realise I was in danger of being completely swallowed up by a Dartmoor mire...but soon did when I started yelling at her to stop taking the picture and rescue me . It took a great deal of pulling to get me out. We gave that location up as a bad job and went to Hexworthy Bridge where the water was smooth and delicious, and more importantly, was only two steps from the car, with no danger of being sucked into bogs.