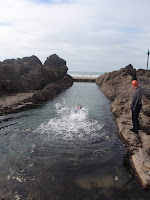 We had a bit of a 'works outing' over the Tamar to Bude in Cornwall. There are two tidal pools - a baby one hidden in the rocks, and the more famous one, which is vast and elegant. The little one was apparently created in Victorian times as a men-only swimming place, and is called Tommy's Pit. It has metal numbers fastened to the side of the rock, presumably indicating the depth, and is perfect for doing your lengths; 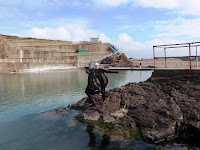 an oasis of calm while the Atlantic roars. We then headed out to the rollers, and did a bit of bodyboarding, before heading back to the top of the beach and plunging into the totally spect 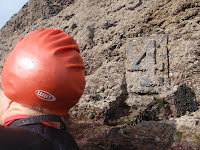 acular and majestic tidal pool. It was built in the 1930s and has that deco elegance about it, with its railings and angles. Three swims in one - we love you Bude! 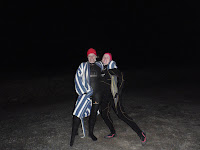 There was widespread excitement and anticipation about the much-heralded Supermoon this weekend; it would be the biggest and brightest moon for 20 years, an unmissable spectacle etc etc. Well oh dear what a damp squib, with the the clouds not quite literally raining on the moon's parade...but blotting it out and blurring it. We went up onto Dartmoor; there was moonlight but it was very obscure. We swam in our illicit place; but in the end our little moon worshipping ritual turned into a plain old swim in the dark.
Posted by Sophie at 09:56 No comments: 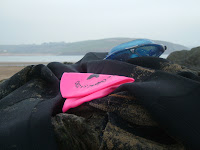 We hadn't really intended to swim around Burgh Island, but that's what we ended up doing. We started off on the western side, where it was calm and the water was unbelievably clear. We kept close in to the island and swam through dramatic channels and gulleys, admiring the swinging seaweed below and the angular rock faces above. At the back it started to get a little choppy, and we were whirled around several times in little eddies. By the time we got to the eastern side, and the last leg, it was much harder going. At one point a group of seagulls kept swooping on us; one landed right by us and floated along with us for a while.
Posted by Sophie at 09:20 No comments: 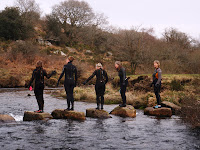 We walked through glades of silvery, stunted oaks along a tumbling stream to a pool on the West Dart. There's a magnificent set of stepping stones, and we posed, like the Beatles on a famous album cover, before wading in and swimming upstream. The moor stretching up on either side was countless shades of grey and brown with splashes of rust from the bracken. Loveliest of all was the pussy willow coming out in the bushes along the river. 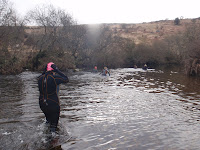 ..like little drops of water hanging on the branches as we swam past.
Posted by Sophie at 11:23 No comments: