The call of the caves 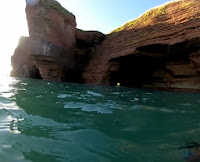 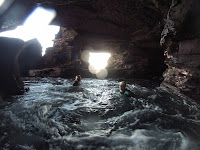 The spontaneous swims are usually the best.  This morning a friend posted a picture of the sea in Torquay looking blue,  sparkling and flat, and I thought, right, I'm going over.  (Fortunately I didn't have anything so tedious as work to be getting on with).   Due to the miracles of social media a plan was made with friends within the hour. The conditions were perfect to swim at the sea caves at Livermead - christened the "Hindu Temples" by author Charles Kingsley, who was bowled over by their exotic shapes.  As we slipped into the petrol-blue water, bathed in autumnal sunlight, it was hard to believe the worst storm in 20 years had just passed through.  Inside the first set of caves the water rumbled like a hungry monster but the shafts of sunlight lightened the atmosphere.  In the second set, Gary and Claire found a whirlpool which they sat in, under the 'windows' above - just like being in the Flintstones' house.  A totally magical experience, made all the extraordinary by the fact that the caves are just yards from the main road between Torquay and Paignton; you might as well be in Wonderland. 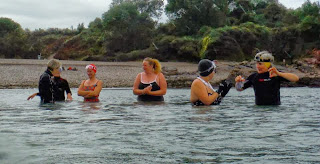 South westerlies have been battering Devon, so I was in search of somewhere sheltered to swim.  Elberry Cove, in between Paignton and Brixham, was the obvious choice, tucked as it is in the SW corner of Torbay, with its back to the gales.  We arrived to find beautiful calm, verdigris water and as we waded in on a very low tide it felt really quite warm.  I've swum here many times and have always been curious about a little cove further along;  I assumed it had no name but my son was looking at a map on a board by the beach and discovered it is called Silver Cove.  We ended up swimming over to it, seeing herons, black backed gulls and cormorants on the way.  I had assumed it would be too cold to swim that far - about half a mile there and back - but the water was lovely. A few of us climbed out to 'claim' the beach; there was no silver or indeed any other treasure in evidence, perhaps it gets its name from the pale stones.
Thanks to Jackie Wills for the first picture. 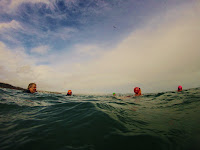 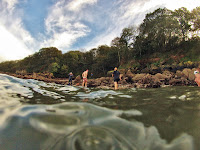 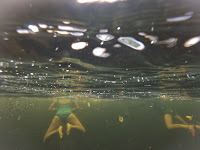 We're at that critical time of year when you have to keep immersing to be able to cope with the cold times ahead. Some friends and I have a regular Sunday morning dip in the Dart which I have only irregularly attended throughout the summer.  So this Sunday I was rather dreading getting in. I stood in the water for a while before taking the plunge, while the rest of the party faffed around on the bank.  That proved a good thing, as I started to get used to it so when I eventually launched it didn't feel too bad.  The water was beautifully clear and there was an amazing underwater autumnal spectacle of leaves drifting down down through the water like little gold coins.
Posted by Sophie at 12:22 2 comments: 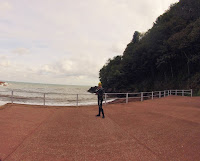 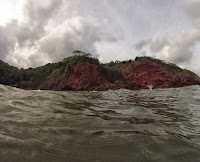 Last time I swam at Watcombe, in Torquay, the sea was flat and crystal clear.  We pootled along the coast under the terracotta cliffs and explored caves and a swim-through where the light created remarkable psychedelic effects.  Ever since, I've been wanting to go back, but today's experience could not have been more different.  Brown, lumpy seas greeted us, and waves tried to topple us as we made our way in.  We swam out of the cove and along the coast, past White Beach and towards the caves, which spewed out white spray busily.  No way could we go in.  But the bounce and sheer freedom of being out in the elements more than made up for that.  It was quite a battle against the constant swell and we all got rather pooped. On our return to the beach we enjoyed various  bakery products (as Ellie called them): jam and custard donuts (thank you Jackie) and pecan muffins (thank you Karen) as well as rum and jelly babies provided by yours truly.
Posted by Sophie at 17:12 2 comments: