A bob at Bantham 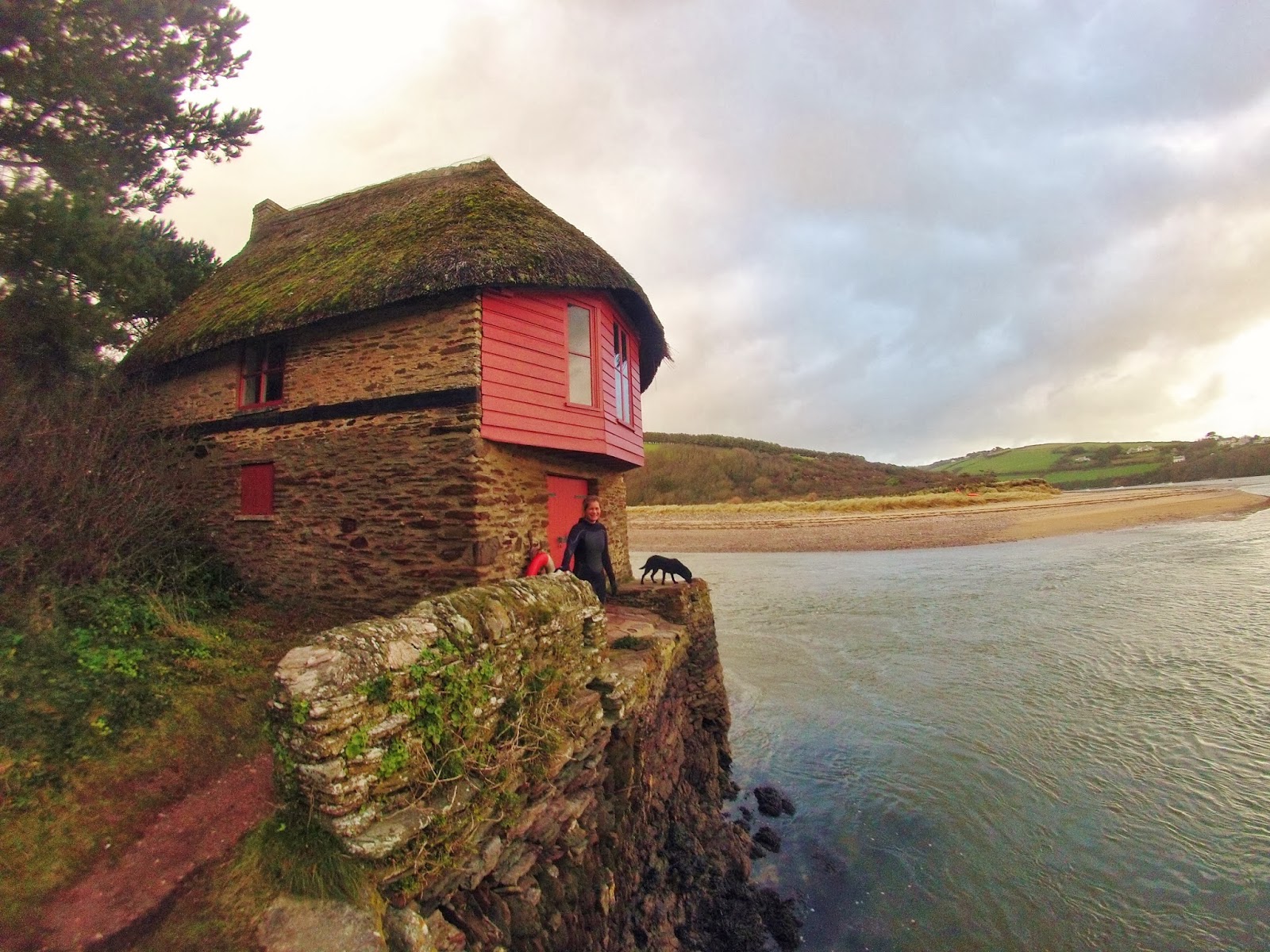 Catherine and I set off across the great bulge of sand at Bantham, buffetted constantly by the wind, towards the pink boathouse -  the start of our float down the River Avon to the sea.  The sand blew in gusts and Jessie, Catherine's black labrador, ran hither and thither, whipped up by the elements.  The river was a not-very-attractive shade of brown.   But we got in,  and were soon swept along by the outgoing current, in what we affectionately call "the Bantham Whoosh".   However the wind soon started to affect the whoosh factor: it was whistling up the river and we were caught in the cross-fire of wind and current; our faces were whipped by the water and our progress towards the sea slowed.

Return to the Hindu Temples 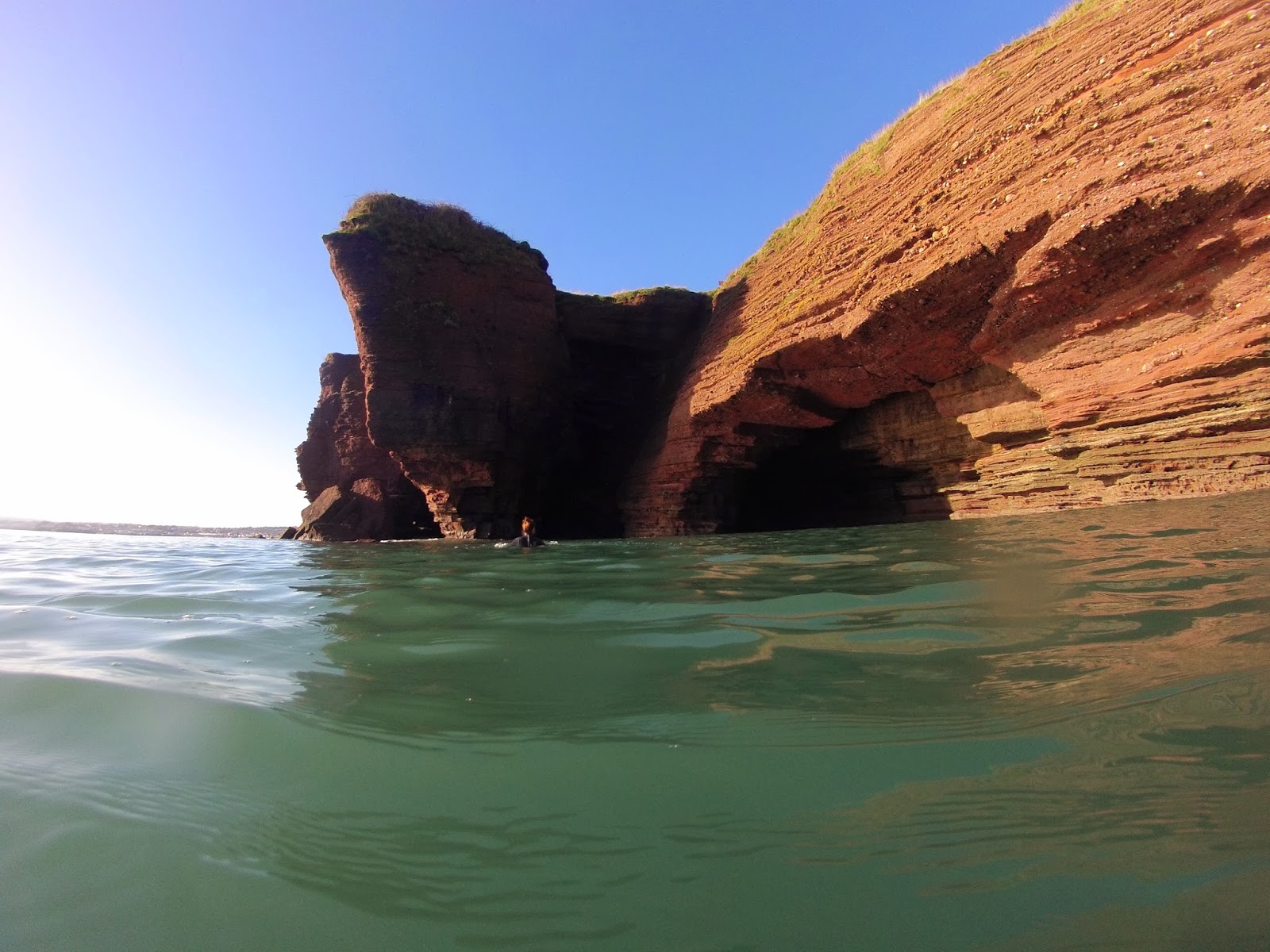 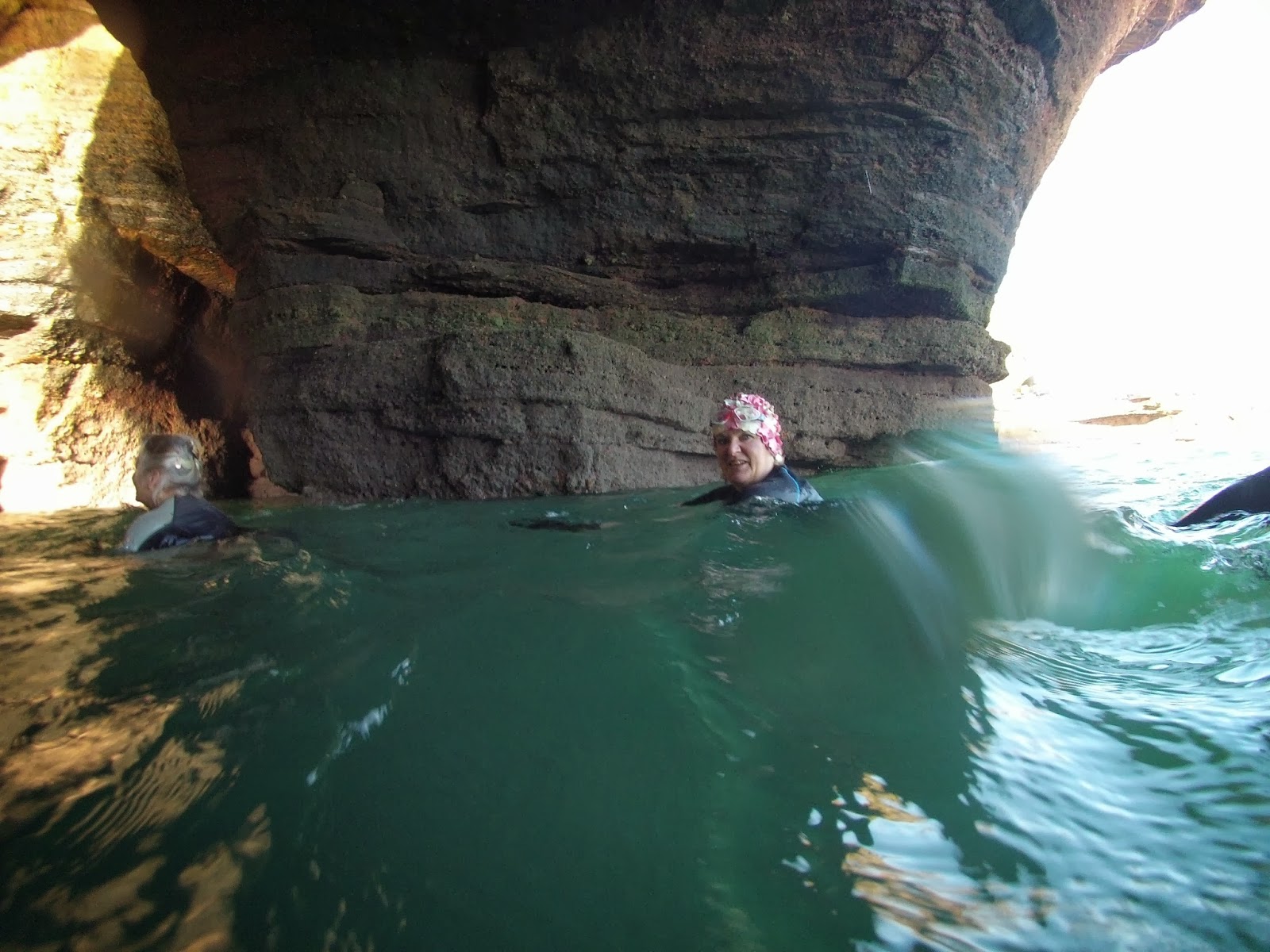 I'd been longing to go back to the Hindu Temples, a spectacular set of sea caves in between Torquay and Paignton, having not swum there for several months. Once you've been, they haunt you and call you back.  They were given their exotic name by the author Charles Kingsley who was captivated by their strange beauty one winter when he and his wife stayed in the Bay. We arrived to find a glorious blue sea, sparkling in the winter sun.  The water was almost turquoise against the great orange slabs of rock, studded with pearly barnacles,that overhung us. As we swam into the caves the water groaned and gurgled, and the light danced on the walls. We swam out of the first set and then climbed into the next, where we walked around before descending into a lower, water filled section, from where we swam out.   As we returned to the first cave someone said "What's that?"   I glanced over and dismissively replied "Oh, just a rock".  Then the rock moved.  "Aaaarggh!  It's a seal!"   Stuff the sightseeing, it was time to head for the shore.
Here's a video of our adventure (NOT featuring the seal). 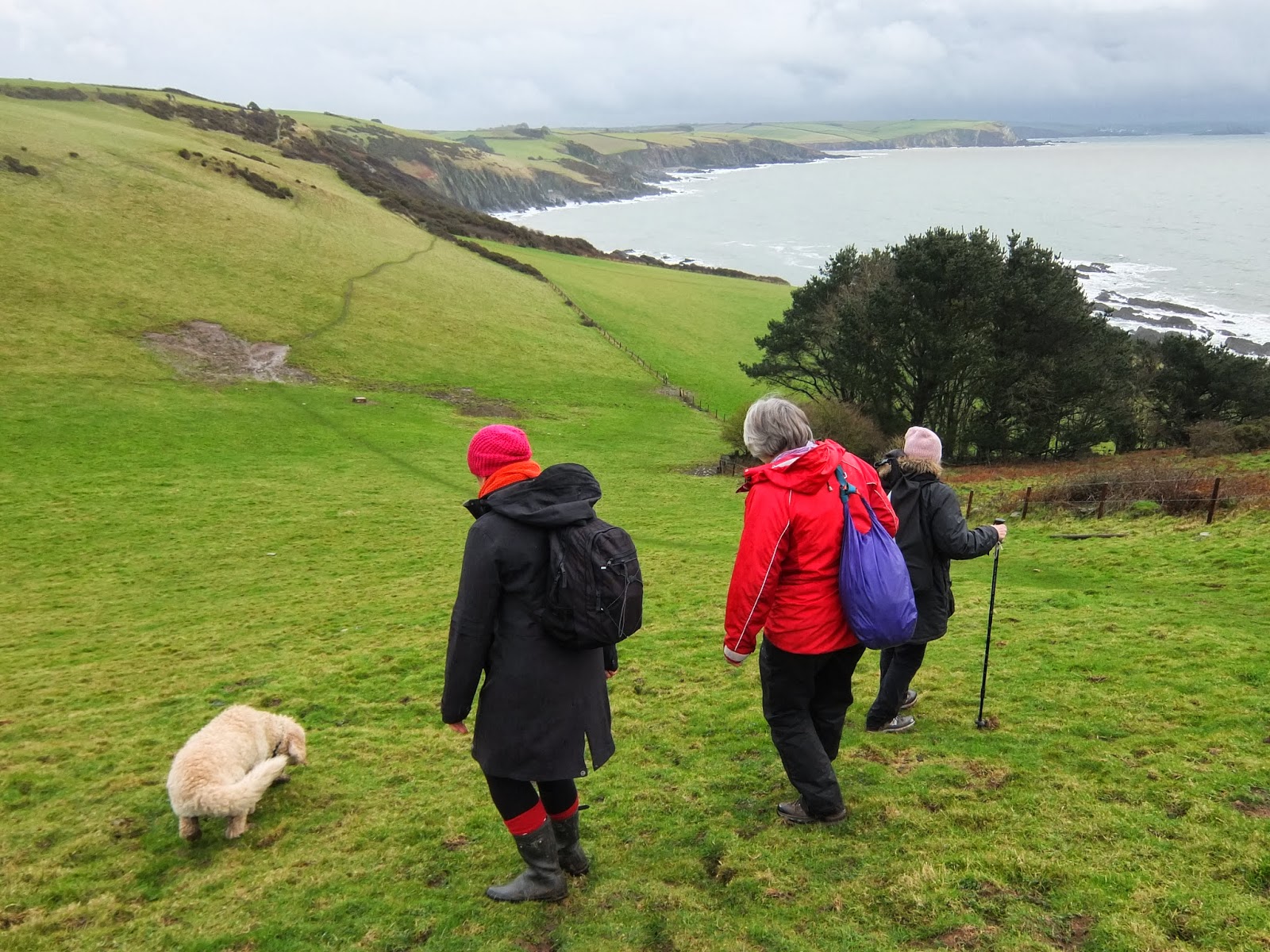 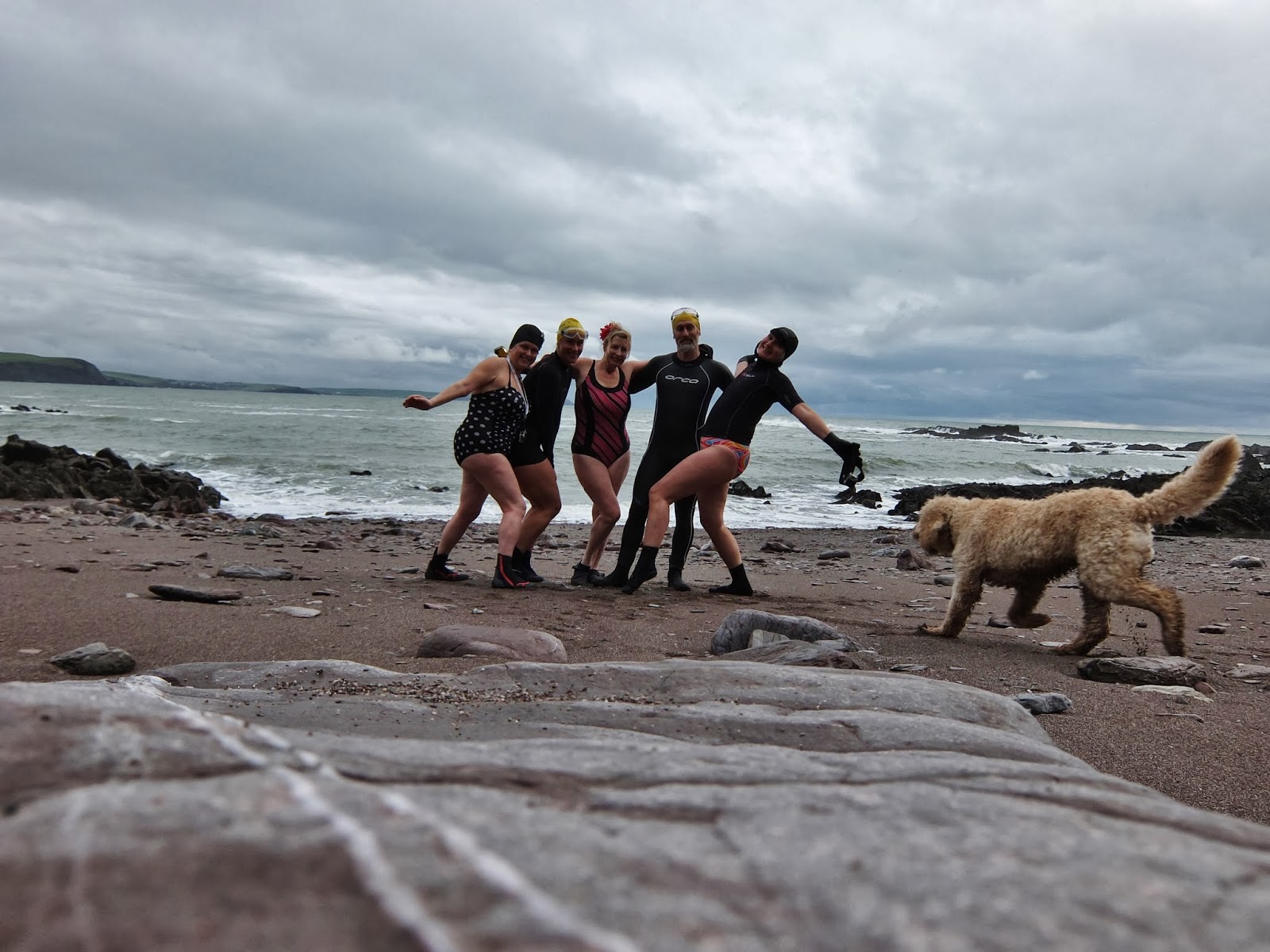 Wadham Beach is a remote cove between Noss Mayo and Mothecombe that is popular with naturists in the summer.  No sign of them today though; it was grey and wet, but actually as we started our descent down an alarmingly steep hill to the beach, the skies brightened up and became positively dynamic.  Down through a tunnel through a hedge and we slipped down a muddy path and onto the beach, which has the most beautiful, bold striped rocks and is bristling with rock pools and channels.  We undressed under the cliff and then ran into the grey sea, where we bounced around in the swell.  The silhouette of a cormorant, opening its wings against a shiny steel sky, brought to mind an ancient coat of arms.
Posted by Sophie at 13:32 No comments: