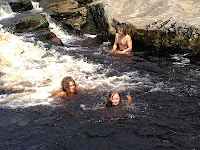 Our swimming family down here in Devon - and indeed further afield - has been thrown into shock by the sudden death of a man we all loved.  Jonathan Joyce died while swimming with a friend  off Beesands. They weren't doing anything out of the ordinary, just training, ploughing up and down parallel to the shore, only 25 metres from the beach, when something happened and Jonathan lost consciousness, and later died.  We still don't know why.   We are all totally devastated.  I want to try and do justice to Jonathan with words; I don't know if it's possible, but here goes.
First impressions: he was tall dark and handsome, with an electric smile and a glow of warmth around him like the Ready Brek advert.  Clad usually in shorts, odd socks and a raggedy woolly hat, he would greet you with open arms before clasping you in an affectionate hug.  In many ways he defied convention but in a creative, positive way, which benefitted others, for example with the company he set up with friends in Edinburgh. (He used to boast about how he never wore a suit - but of course when he did he looked fab). Quite simply, he was just such fun, always up for a laugh, sociable and interested in everyone around him.

Here are a few memories:  Jonathan announcing his new challenge - what he called his 'wildathon' -  cycling to the River Dart from his home in Ashburton, via ridiculously steep hills, then hiding his bike in the bushes before running the two miles to Sharrah Pool where he would swim before doing  the whole thing in reverse.  I have to admit my main reaction to hearing about this was "how very tiring".  Not for Jonathan though.
Next: us swimming in the Mermaid Pool at Burgh Island, and diving off the platform in the middle; with Jonathan choosing to do a spectacular somersault and making an almighty crash as he did so.
Easter Sunday last year: a gorgeous day at Soar Mill Cove, with an Easter egg hunt (with melting eggs) for Finn and my boys. Jonathan was the only man swimming and as we took pictures of the group before going into the water, there were lots of jokes about "Jonathan and his harem".  He then shot off and swam around the Ham Stone about half a mile off shore. 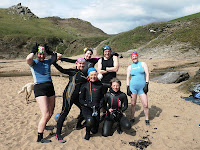 I remember Steph's birthday, celebrated by swimming around Burgh Island, everyone carrying a red balloon.  In order to make this happen Jonathan lugged a huge cylinder onto the beach to blow all the balloons up.
Then there was the first time I ever swam with Jonathan, one December day at London Bridge in Torquay, where we ventured  into one of the caves.  There was a big swell and we all shrieked with nervous laughter as we were unceremoniously lifted up and then sucked down as the water ebbed and flowed; a very bonding experience (which Jonathan video'd, to hilarious effect) , which I think gets to the heart of why us swimmers seem to become so close.  When you're out there in the sea, you all look out for each other; it is an intensely shared experience.  Jonathan's death seems so cruel and so unfair.  But he, of all people, can truly have been said to have lived life to the full.  Dearest Jonathan, I hope you are enjoying endless swims in the great ocean in the sky. 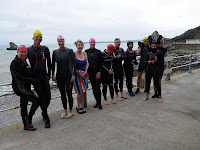 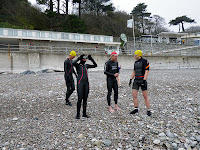 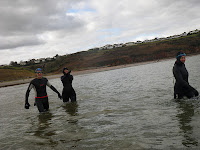 Amazing Sophie. Swimmers seems to be as graceful with words as they are in the water x

thank you both. Such a shame that words can't bring him back.

What a moving tribute. He sounds like one of a kind. How sad.

He truly was. His spirit will live on.

Thank you Jackie, and Peter, all I can say is that Jonathan inspired the words.

Dear Sophie, I'm very sorry for your loss. He sounds like he was an amazing man. You write beautifully. Xx Deborah.

Stunned by this news. Hadn't seen Jonathan for ages until bumping into him in Co-op Ashburton about 6 weeks ago - asked him about this cross channel swim last year (a regular customer in our shop for "warm clothing") and he took great delight in explaining that he hallucinated seeing a large building in the channel, but actually saw a large floating mass of seaweed, with a wooden door on top, with a dead cow on top of that - my kids thought this was hilarious! Not living in Ashburton and only coming down to the shop twice a week, I have been oblivious to this sad news until this weekend. Our thoughts are with his family, friends and colleagues - a big loss.
John and all at Trailventure

Thank you John, indeed it is a huge loss, we still can't believe he's not here.

I'm an avid follower of Devon Dispatches and as a keen sea swimmer I read with sadness of J's death. I had read about it elsewhere before in the media, but only just realised that J is the same Jonathan whom was in my form at Halliford School all those years ago. I remember when he arrived from Hampton School (had he been expelled?). I left in 1988 but remember him as a remarkable person, even then. Very sad, especially with the recent death of Susan Taylor in the Channel. It just seems very unfair. Two beautiful people.

Yes, it's so desperately sad isn't it. The world seems like a very small place sometimes.