It's the 18th of March and it's snowing.  Our second whiteout in a couple of weeks.  Crazy weather and this month has generally felt a bit crazy.  It was the first anniversary of Felix's death on the 8th/9th, and I was transported back to that horrendous week when I discovered he had died.  I had gone to see him in a show in Leicester where he was at university, and he never showed up at our meeting place.  I raised the alarm, and went to his halls where I arrived to find an ambulance outside.   He was dead in his room.. A year has passed and in many ways I am still in shock and there are many days when I still cannot comprehend it, I still not quite believe this has happened.

When I swim - and this is particularly true of swimming in the sea - I feel closer to him.   In the water my body is weightless and I feel detached from the world, like a spirit, an essence, which I suppose is what he is now. I need that feeling of separation, of absence from my new life without him, and to return to a kind of state where I am with him. 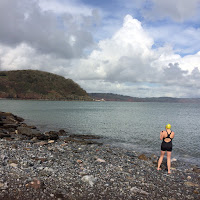 This week I have slept very badly and felt a particular urge to swim.  Ju and I went down to Hopes Nose. It was low tide and we swam off a little beach packed with grey pebbles streaked with pink and white quartz   The water clasped us in its coldness and I shut my eyes and felt the water, and felt my son.
Posted by Sophie at 16:28