My dear friend the Dart 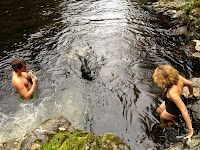 I've been neglecting my great friend recently.  Don't know why really, I was constantly in the river during the heatwave, but in the last month I've just been in the sea.  So I was a bit apprehensive about getting back in the Dart again, having heard reports that the temperature has plummetted; indeed it's a little over half the temperature of the sea at the moment.  We went along to the Double Jacuzzi Pool, and I was last to get in, sliding in cautiously.  But to my great delight the water felt soft and silky - and really quite warm.  The big boulders below me looked fuzzy and out of focus.  The water has become less clear as the rain brings down mud and debris from higher up the Moor, and the boulders have acquired brown furry coats; no doubt I'll be doing the same in the next few weeks. 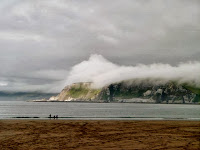 In what's now become a bit of a tradition at this time of year, I had a birthday party at Bigbury on Sea, with BBQ and a swim around Burgh Island.   Alex cooked up a storm and we had an absolute feast including sausages, prawns, mackerel, chicken and burgers; it was overcast but warm and we sat on the beach munching and gossiping.   Then we noticed an eerie sea mist lingering over the shiny slate cliffs in the distance; quite beautiful, and then we could see patches of sunlight on the sea in the distance.  A group of us set off to swim around the island; the water was flat as a millpond and as soon as I got in I felt excited because it was crystal clear and I could see the ripples in the sand underneath, studded with cockle shells. Kari and I swam in close to the island perimeter, over gardens of kelp and rocks covered in pink lichen; every so often in the gullies we got gently pulled in by small eddies and equally politely spat out. It was a low spring tide: in amongst the rocks were small lagoons, fringed with great swathes of seaweed, hanging down from their roots above us.  Back on the beach we had Stephanie's home-made bread and jam for pudding; the sun came out and it felt like summer.

Thanks to Allan Mcfadyen and Amanda Bluglass for the pictures.
Posted by Sophie at 09:10 No comments: 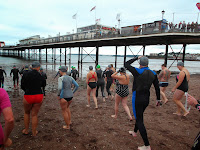 I've just done the most wonderful charity swim. It was a party.  Everyone was so friendly, everything was so relaxed, and the whole thing rounded off with live music and a bbq at a pub overlooking the sea.  What more could you want? The Pier to Pub Swim in Paignton  was organised by three of my friends, Matt, Queenie and Mark. That's not why I'm raving about it (honest). In fact my expectations weren't high at all as I'd been hearing all about their nightmares in the months running up to the event; website registration problems, swimming cap orders not arriving, etc etc.  But on the day it all came together, and everyone had a ball. 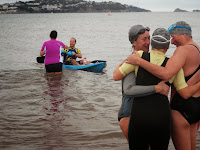 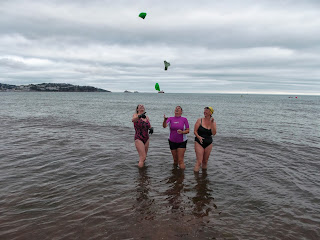 Pool plunging (with an emergency rescue thrown in) 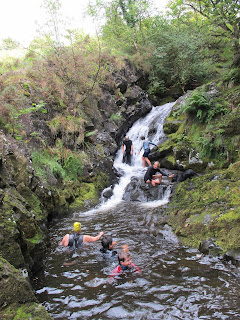 We were off to (new for me) territory: the East Okement river near Okehampton. Lynne led us through ancient woods which bristled with sunlight,  and up along the river past a series of pools and cascades.  The river ascended like a wonderful watery staircase, and culminated in a spectacular waterfall. We'd just got changed, ready for our dipping extravaganza, when we noticed an old man crawling along the path a bit further down.  He seemed rather incongruous, dressed quite smartly in a jacket and carrying a sodden newspaper, with muddy knees. We went to help and it was soon obvious he was very bewildered; to cut a long story short we called the police and some of the party escorted him back; it turned out he'd been reported missing a couple of hours earlier.  Good deed done for the day, we started our swimming at the pools above the waterfall, where Allan, Helen and Deb frolicked in a double cascade.  There was a bit of bravado from Lynne as she contemplated sliding down the huge waterfall; sensibly she decided against it and the party scrambled down and swam in the pool below it before climbing up and standing in the falls for some serious head and shoulder massage.  Further down the river we found a lovely bowl of a pool, lined with pale grey and green stones; it felt calm and womb-like.  From there we swam down through a series of small almost rectangular pools which felt like rooms; some lined with thick green moss to rival the finest flock wallpaper. 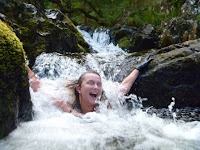