In search of the Holy Grail 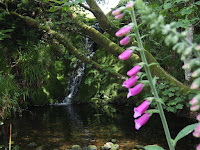 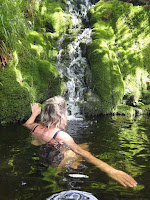 My friend Rachel has been trying to find a hidden waterfall on Dartmoor for at least fifteen years, after a friend told her about it in glowing and rather mystical terms.  It's called Shavercombe. She's had at least two aborted attempts; the latest was with me, a couple of months ago, when the weather was so wet and awful we had to give up our quest after getting stuck in bogs and failing to ford a river.  Today, after a long dry spell, it seemed the right time to try again, and we set off full of anticipation, but trying not to get too excited, in case fate intervened again to prevent us reaching our Holy Grail.  The Moor was beautiful.  Larks were everywhere, flitting around down low as well as high above us, and clumps of bog cotton dotted the wetter areas.   We found the stream and made our way up it.  It was tiny, and it hardly seemed possible there could be a waterfall, especially in the rather featureless Dartmoor landscape.   But suddenly, up above, we could see a patch of green, and sure enough, there was the waterfall, enclosed by a network of branches, like a moss-lined room.  It was enchanting. 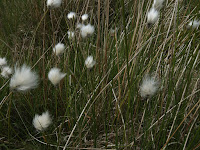 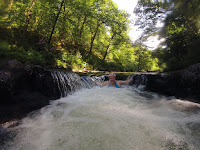 The weather has been glorious for the last two weeks, and the water temperatures have been soaring.   In the East Dart at Bellever I wallowed, watching an eel, in a shallow pool where the temperature was an astonishing 17.5.  During the last week we've been swimming most nights in the SSS (swift swim solution) pool -  where the temperature has averaged between 15.5 and 16 degrees.  And in a lake on the Moor one night it was 19.5.  Plus, the chanterelles are out, with great pickings, especially for June.  And by happy coincidence, they grow near our swimming places. 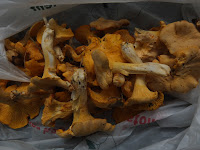 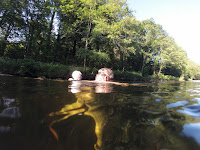 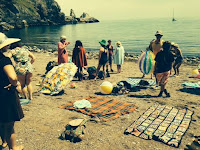 Black forest gateau, pineapple upsidedown cake, crimplene, psychedlic prints, brown towelling and a particularly lurid pair of orange trunks all made star appearances in our 70s splashmob at Redgate Beach in Torquay.  My pal Matt had the idea, after feeling sad that the beach, which was packed in its heyday, is now officially out of bounds - according to the council at least - because there's no safe way of getting to it.  Undeterred, we climbed around the rocks at low tide, armed with lilos, beach balls, and other paraphernalia, and set up camp on the beach.  There was a 70s spread of egg rolls, quiche, and pineapple and cheese on sticks, as well as the aforementioned cake. Very obligingly the sun came out - just like the heatwave of 76 - and the swimming was divine, in calm, warm water. 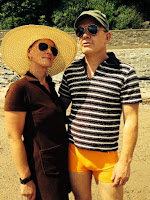 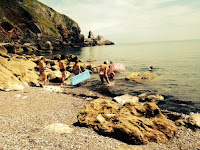 In my father's footsteps 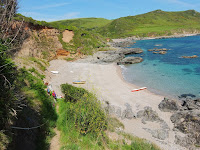 In 1938 my father Roger and his brother Barry went with their grandparents to stay with a fishing family on a very remote part of the Devon coast, at Ivy Cove near Start Point.  It was very different then, with its own little fleet of fishing boats.  I have a little album of snaps his grandmother took with her box brownie, and I decided to go and retrace their steps, and try and recreate some of the photos in the present day.   As we approached Ivy Cove, we came across a couple and their grandchildren and got into conversation.  It turned out he was the local farmer, so I showed him the album, and told him how Dad used to stay with a family called the Logans.  "Oh Bill Logan still lives there" was the response, and apparently I'd find him working in his garden. Sure enough, at Ivy Cove, there was Bill tending his broadbeans in his veg patch overlooking the sea. I introduced myself and it turned out Bill had a photo of my great grandfather - except he'd never known who he was.    We then went down to the beach which was truly beautiful: shimmering white shingle, crystal sea and a raised platform of rock laced with gullies and chasms.   It was so strange to think of my father and his brother fishing, swimming and diving here nearly 80 years earlier. Tragically Barry was killed in the final stages of the war just 7 years later, aged 23. 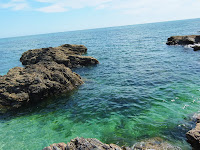