The sharks' fins of Torquay 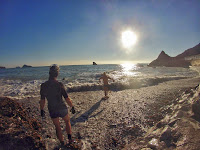 A sporting swell and some fat rollers greeted us on our arrival at Meadfoot.  The sun was gloriously bright and the islands off the beach rose up like shark fins in the distance.  Getting in was a little hairy, as the waves tried to knock us over, but once in we were fine.  We swam around Triangle Rock, continuously carried up and down by the swell, and blinking in the brightness of the sun.   Once round the corner, we swam along to West Shag Rock.  Gary was keen to 'claim' it, and launched himself into the swirling surf at the bottom of the island, so as to stretch out and touch the rock before being knocked back by the surf. As we swam back I saw an exotic looking white house at the top of the cliff that I'd never noticed before, with the perfect round turret looking out to sea.
Posted by Sophie at 14:39 No comments:

A swim and a skull 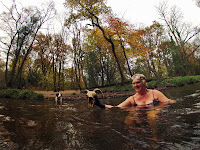 Anna and I set off from New Bridge following the Dart upstream, in constant admiration at the intensity of the oranges and golds of the leaves, set against the dramatic river rushing below.   We arrived at Holne Cliff, opposite Wellsfoot Island, where the river opens out into a particularly dark, oval pool.  Wild swimming guru Rob Fryer has a powerful description of the boulders on the bottom of this pool; he says they're like 'tightly swaddled babies'.   Anna and I made our way in by wading in along a ledge and under a fallen tree, before launching out into the cold yet beautifully soft water.  There was a strong current to swim against to get across to the calmer side by the beach on the island, but the effort of swimming against it helped us acclimatise.  Lily, Anna's dog, seemed very excited and we discovered she'd found a sheep's skull with a spectacular set of horns.  Anna took it home to add to her growing collection of Dartmoor bones.
Posted by Sophie at 17:27 No comments: 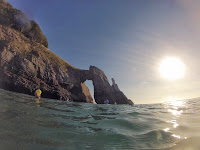 Allan had made a plan for a swim to London Bridge, a natural arch in Torquay.  Who would have thought that a swim in November would be so glorious?  As we arrived at Peaked Tor Cove the sun sparkled on the sea and the tide was very low. (It is a full moon tomorrow, so big tides).  We changed on the old concrete bathing platform, which was men-only in the days of segregated bathing, and climbed down the old barnacle-covered steps.  As we headed towards the arch the sun shone in our faces; London Bridge was stark in silhouette.  As we approached, it loomed in its great

magnificence.  The sea was petrol blue and glossy ribbons of kelp swayed to and fro, hanging from the rock. The tunnels and caves inside the arch were accessible, because the tide was low, and we swam inside, and were rocked up and down by the swell....before the cave turned nasty and spat us out.
Thanks to Jo Lubbe for the picture inside the cave.
And you can watch the swim below!

Down to the Dart for a quick dip with Ellie...on arrival at Spitchwick there was a remarkable tideline of twigs showing how high the river has been in recent weeks.  Fortunately all had settled down and as we plunged in the cold clamped our limbs. We swam quickly upstream, gradually getting acclimatised, and then floated back down the bend and underneath a canopy of oaks, still in green-shield-stamp leaf.
Posted by Sophie at 12:43 1 comment: