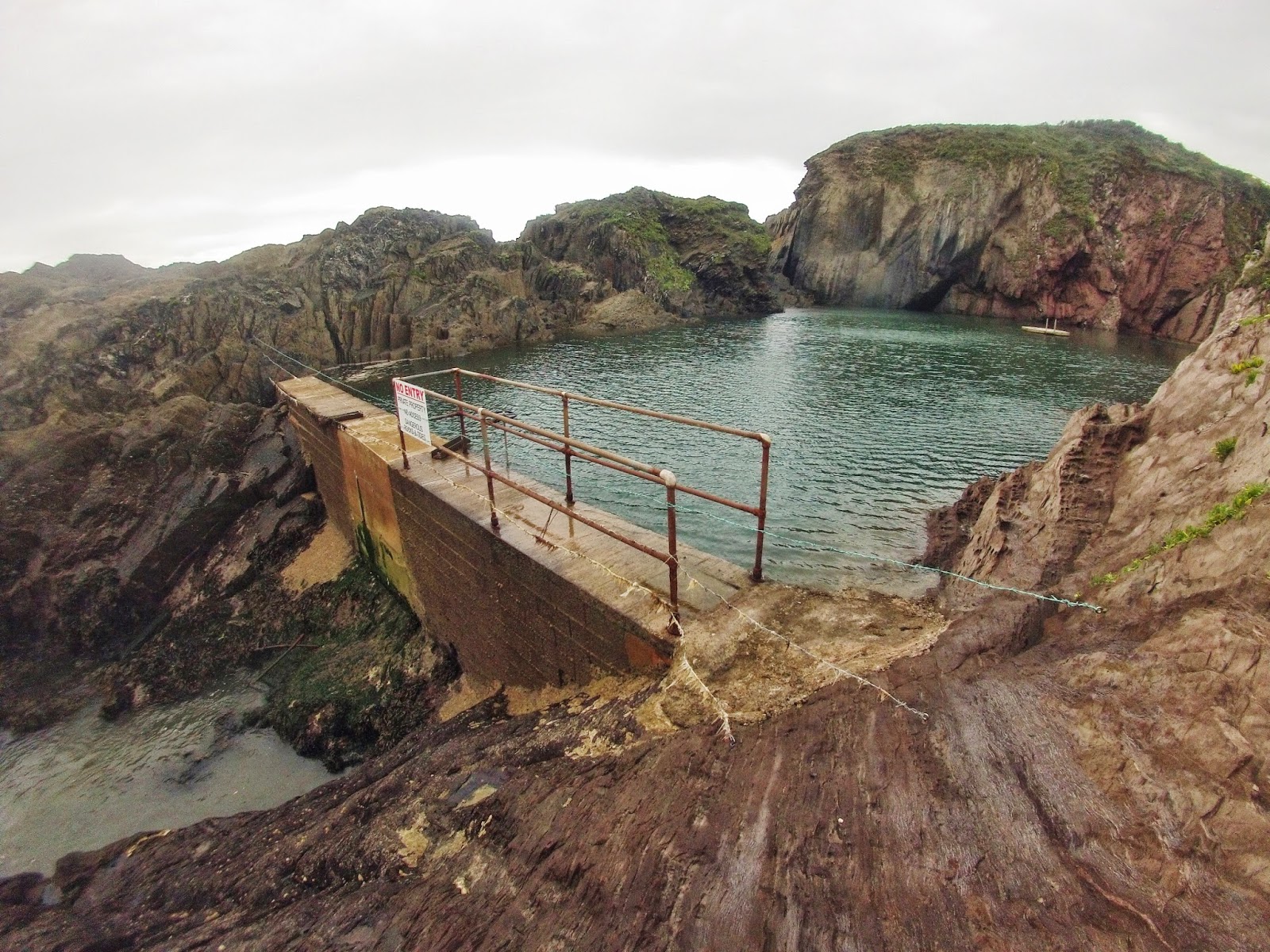 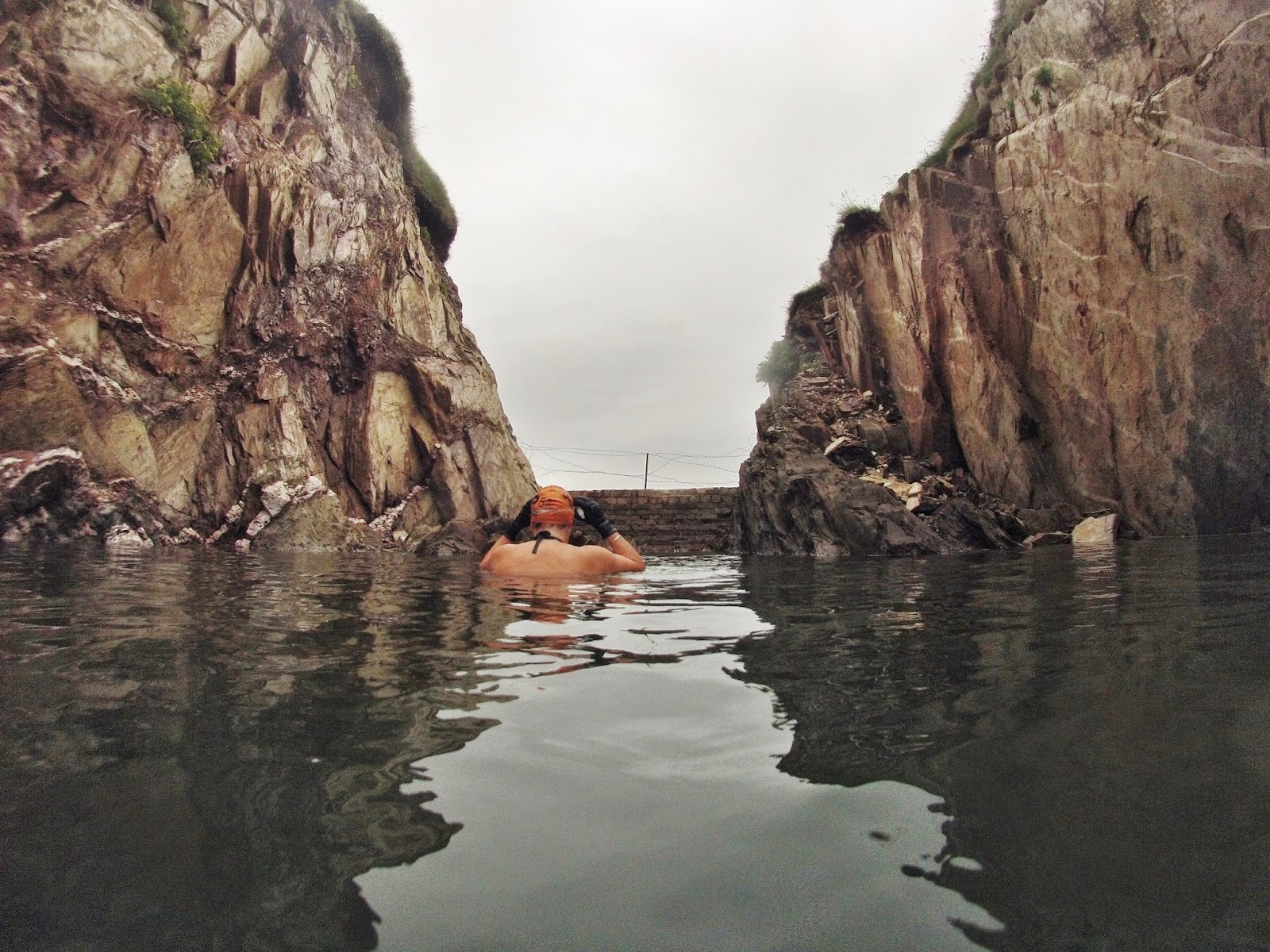 There's barbed wire and a new "Keep Out" sign at the Mermaid Pool at Burgh Island.  We didn't swim there of course. The picture shows the resident mermaid. 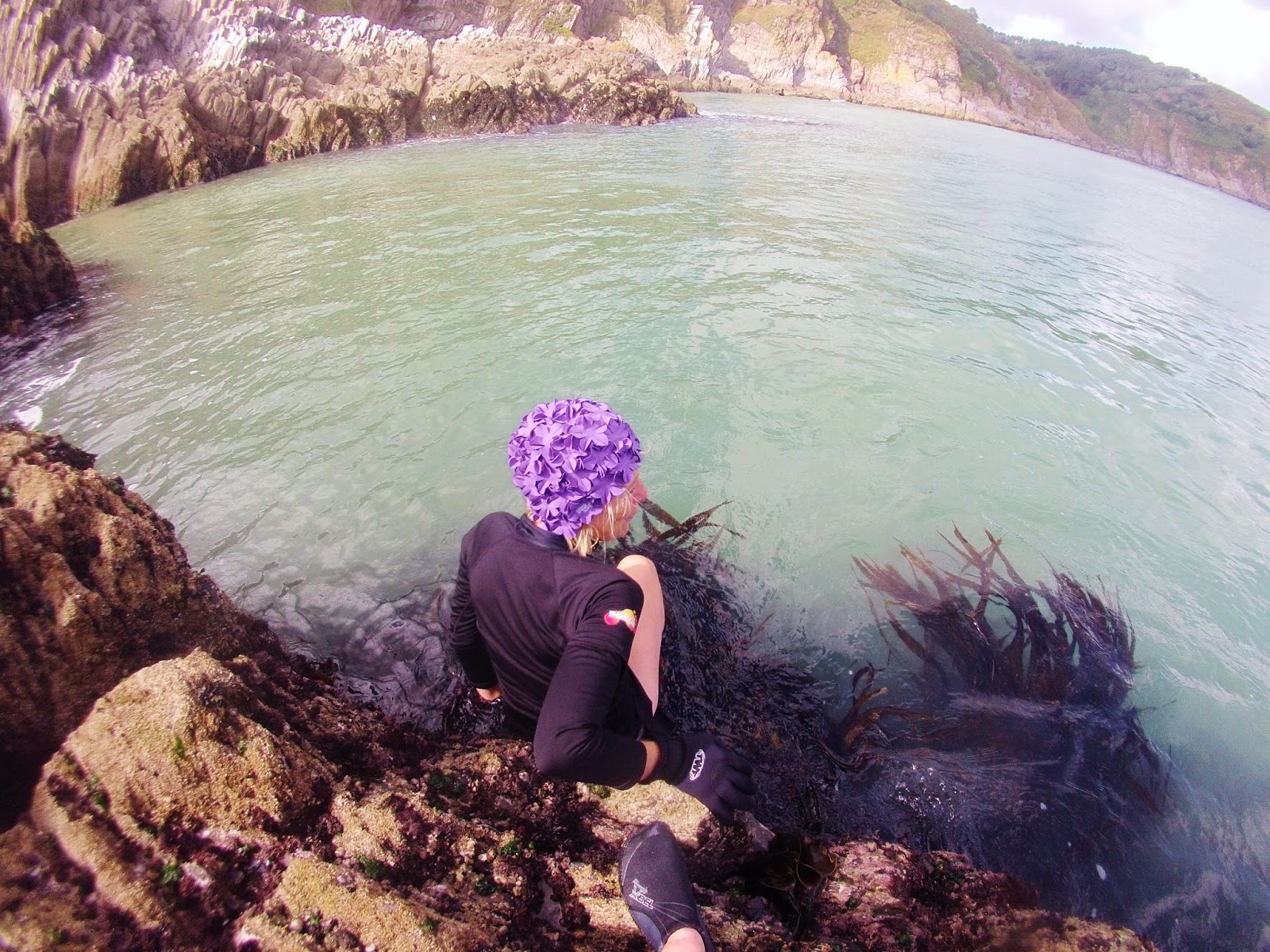 It was an isolated sunny day amidst the downpours and Rachel and I set off for Kelly's Cove near Kingswear.  The hedges were packed with blackberries and sloes, and the sea off Dartmouth was similarly packed with boats, because it's the Regatta. Kelly's Cove is not really a cove, but a series of rocky inlets; you climb or jump in off ledges and it's a great place to explore.  On past swims the water has been gin-clear but today it was a milky green - I guess because of all the rain and wind we've had.  Rachel and I bobbed about and swam round to another little cove where we found a bright orange buoy; we spent some time trying to dislodge another one but it was wedged into a great tightness as they usually are. 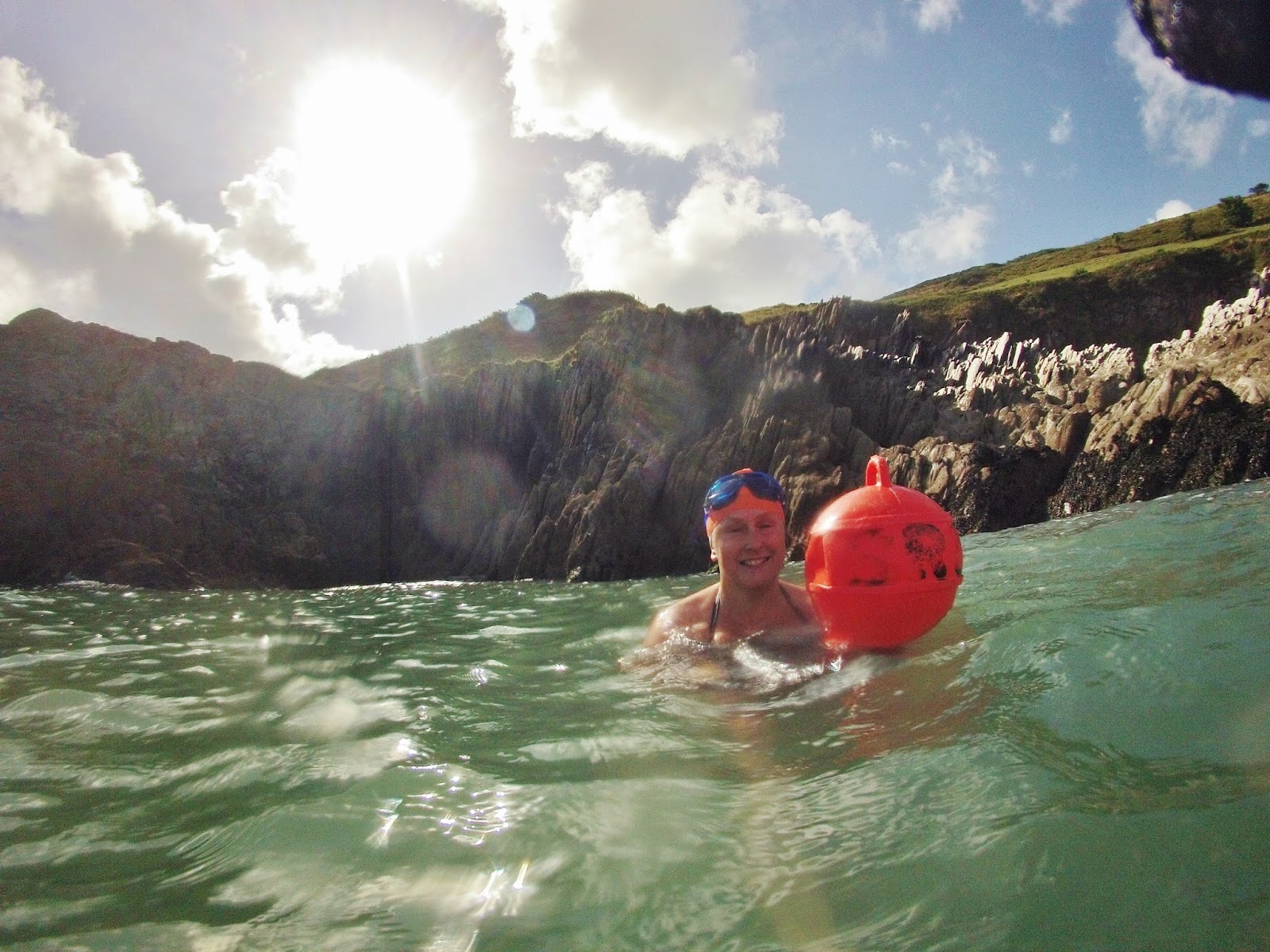 A faff of swimmers 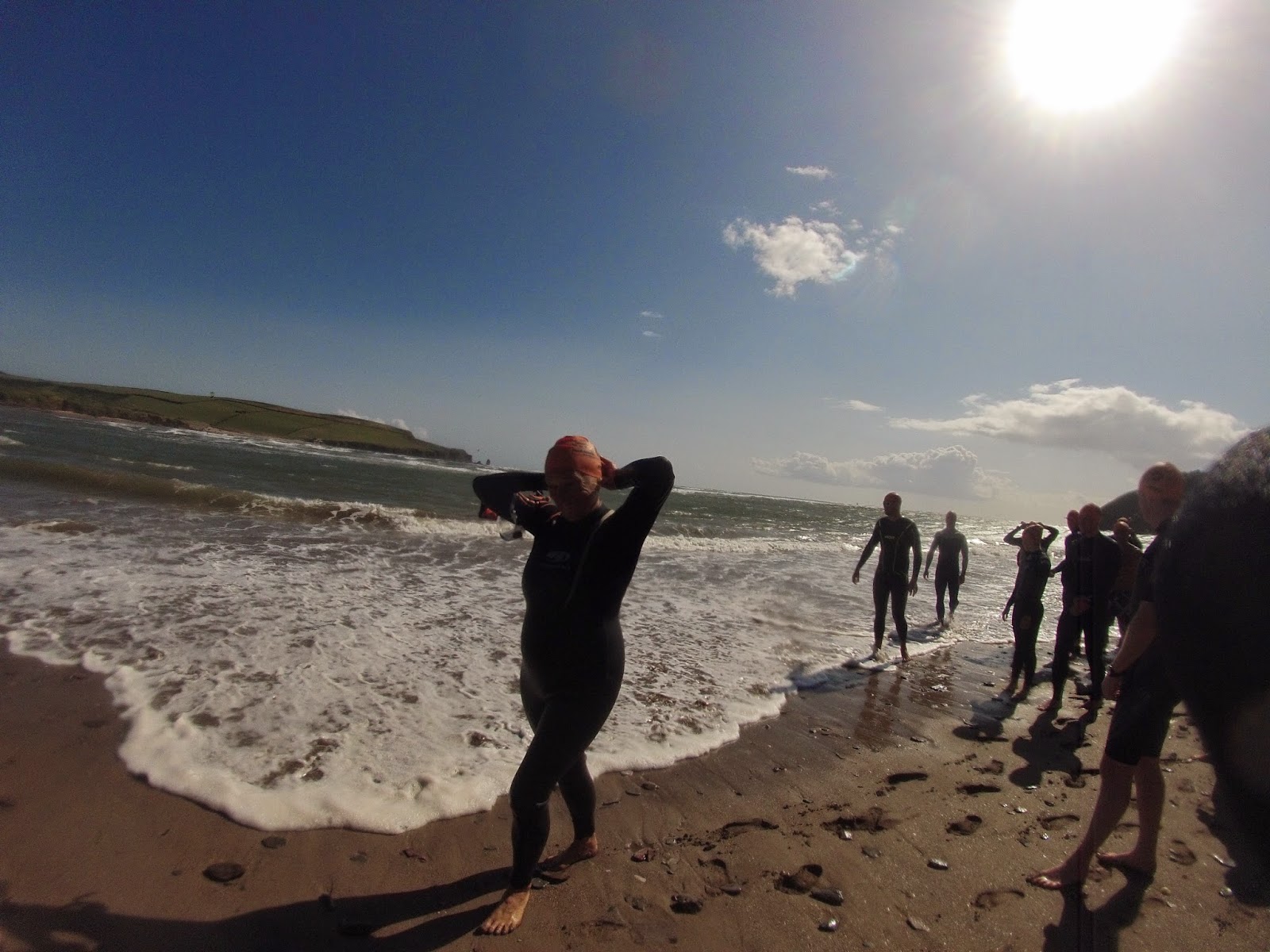 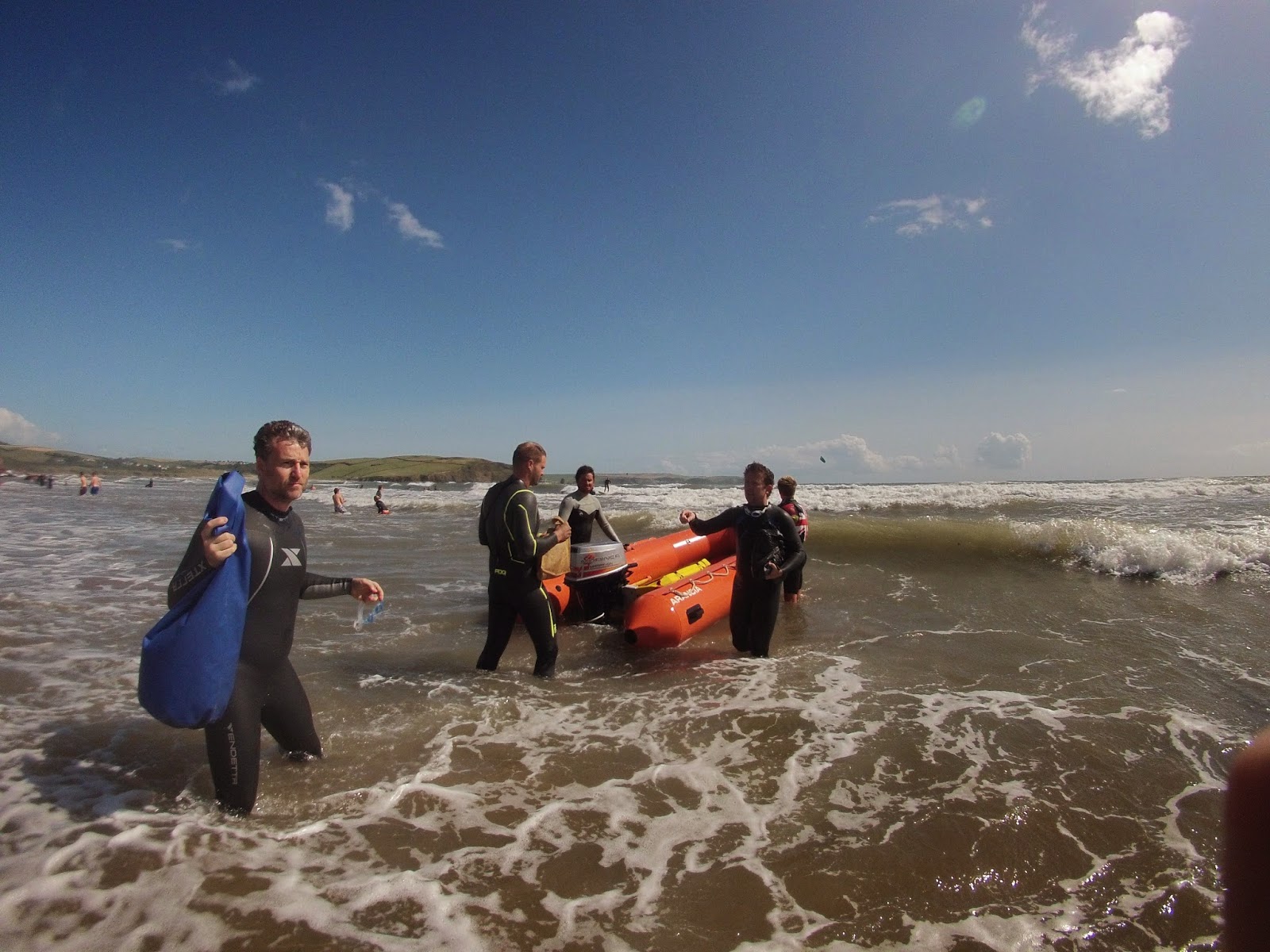 Today pre and post swim faffing reached new and quite ridiculous depths.  David and Tamara were down from London, to do the new Pub to Pub Aquathon with Kari and me.  This was supposed to be a swim from the Pilchard pub on Burgh Island to the Sloop at Bantham, across the bay and up the river on the incoming tide, with a short run to the pub at the end.  Cue, before the event, all manner of mind-boggling logistical preparations, involving three cars, clothing, money, and trying to work out where all these three should be and at what time. In the end it all went off brilliantly, er, apart from waiting around for one and a half hours at the end trying to find the person with the key to the car which had all our clothes in....still, in the meantime Kari managed to sweet talk the pub into giving us Pimms on credit.  The swim itself was slightly constrained by Hurricane Bertha, in that the strong winds meant we couldn't start the swim at the Pilchard, and had to set off at the river mouth.  The unexpected bonus was we got a hair-raising ferry ride to the start in the lifeguards' RIB, zooming out over the surf.  Then, once the race started, we were swept up the river in the 'whoosh' of the incoming tide....we sped past the pink boathouse at Jenkins Quay and on up to the thatched harbour master's office where we got out to claps and cheers from onlookers, before puffing up the hill to the finish.  What a great day, and thanks to the organisers Ruth and Patrick. 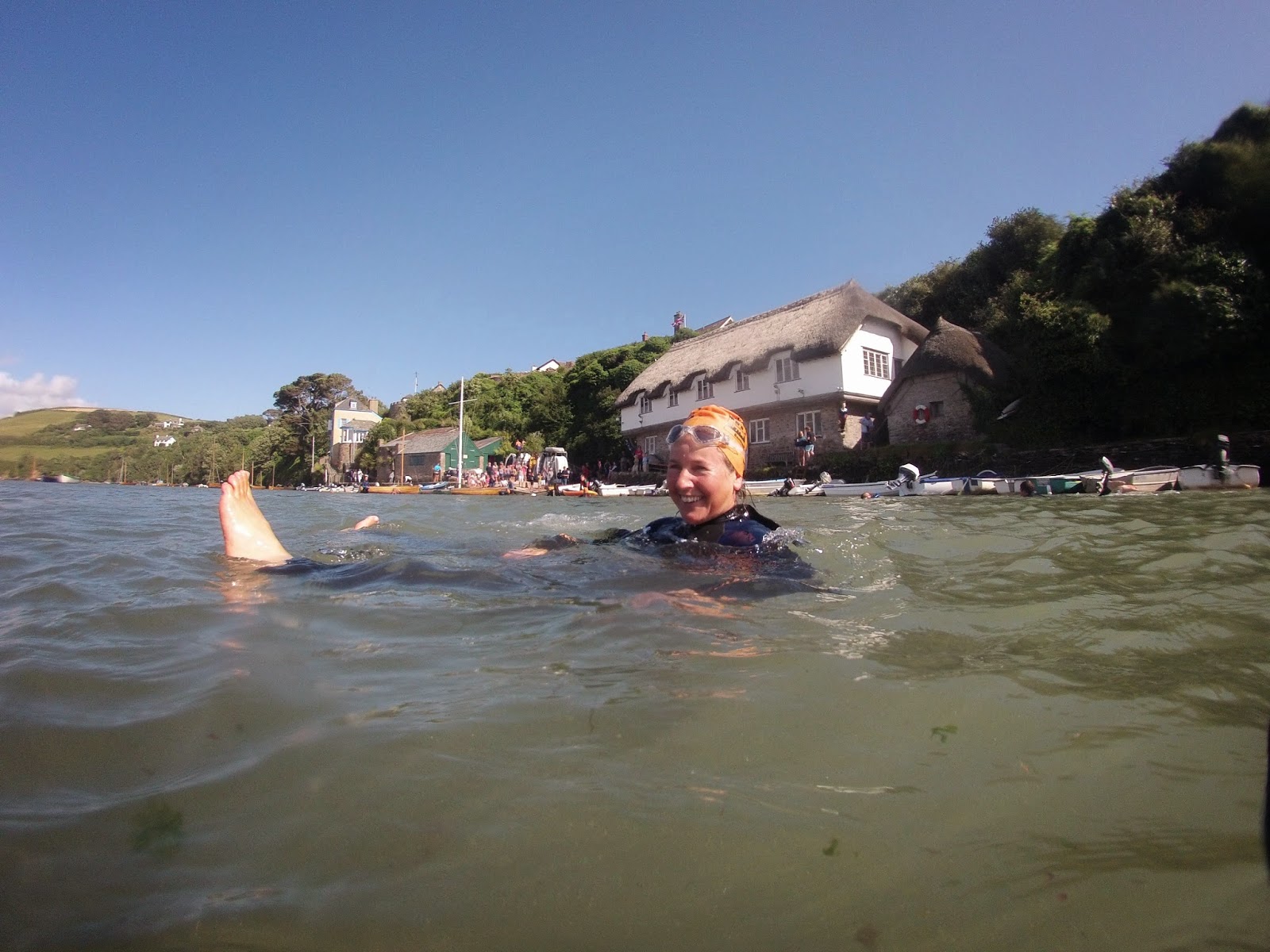 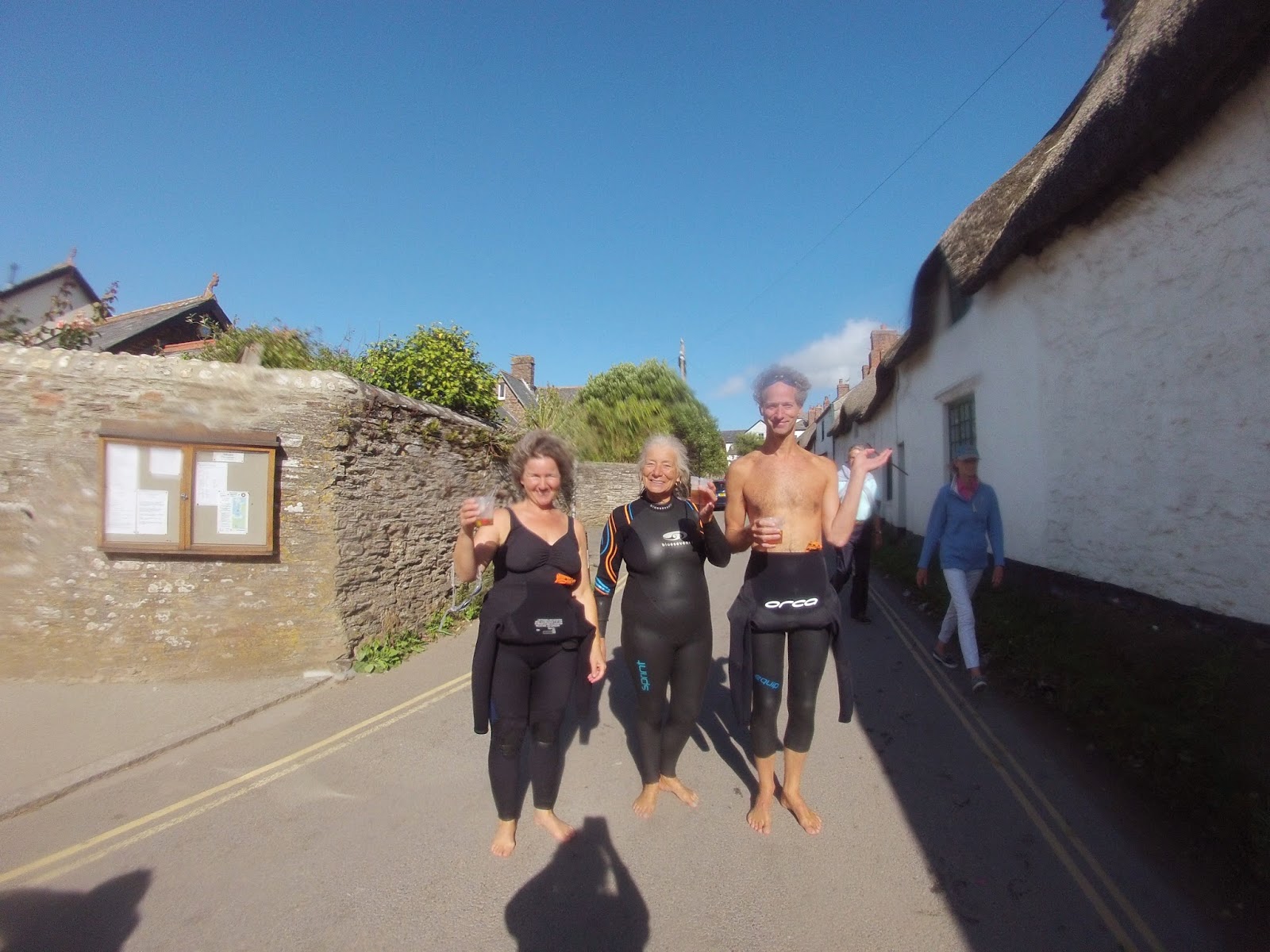 Blog from the bog 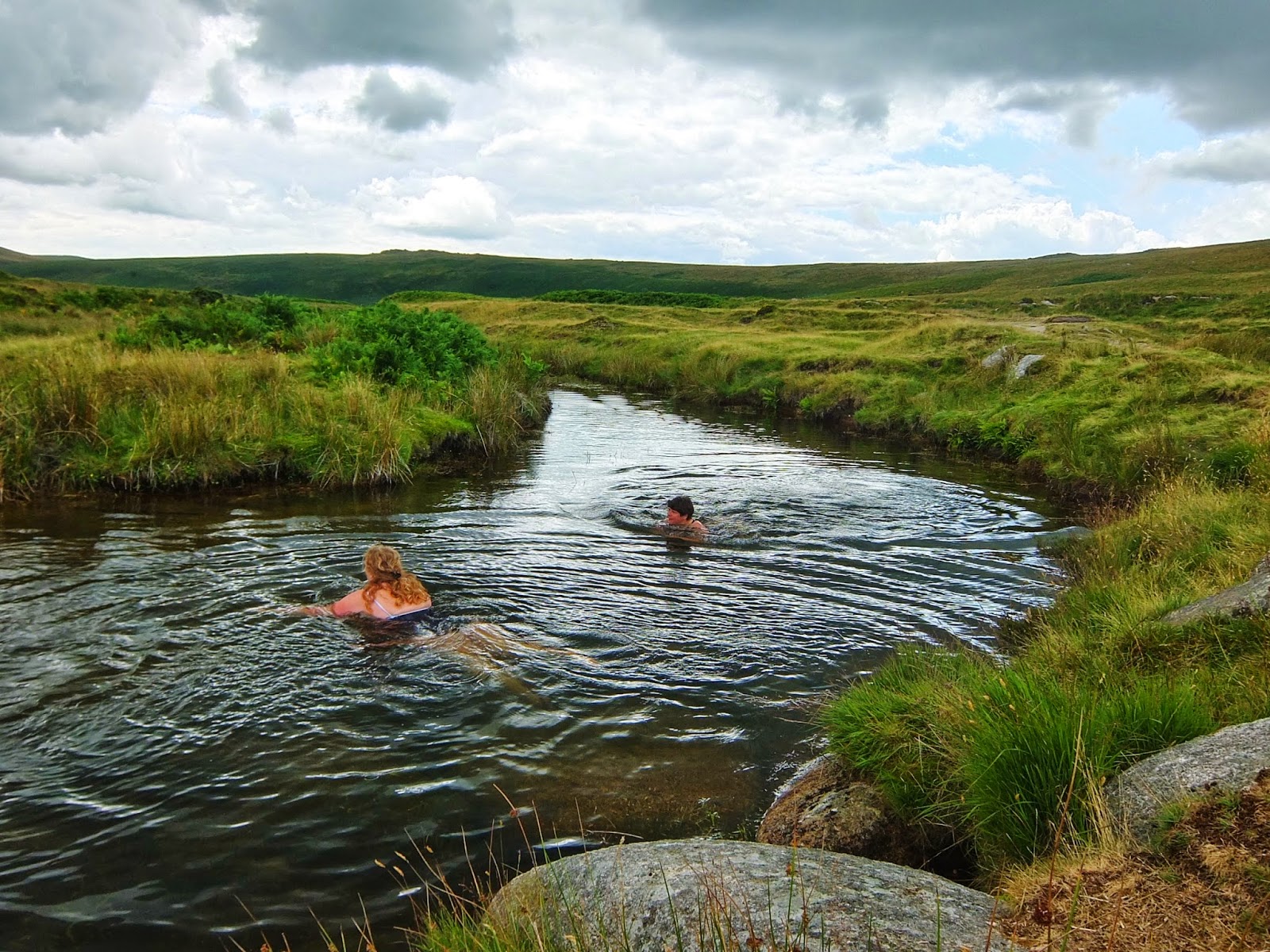 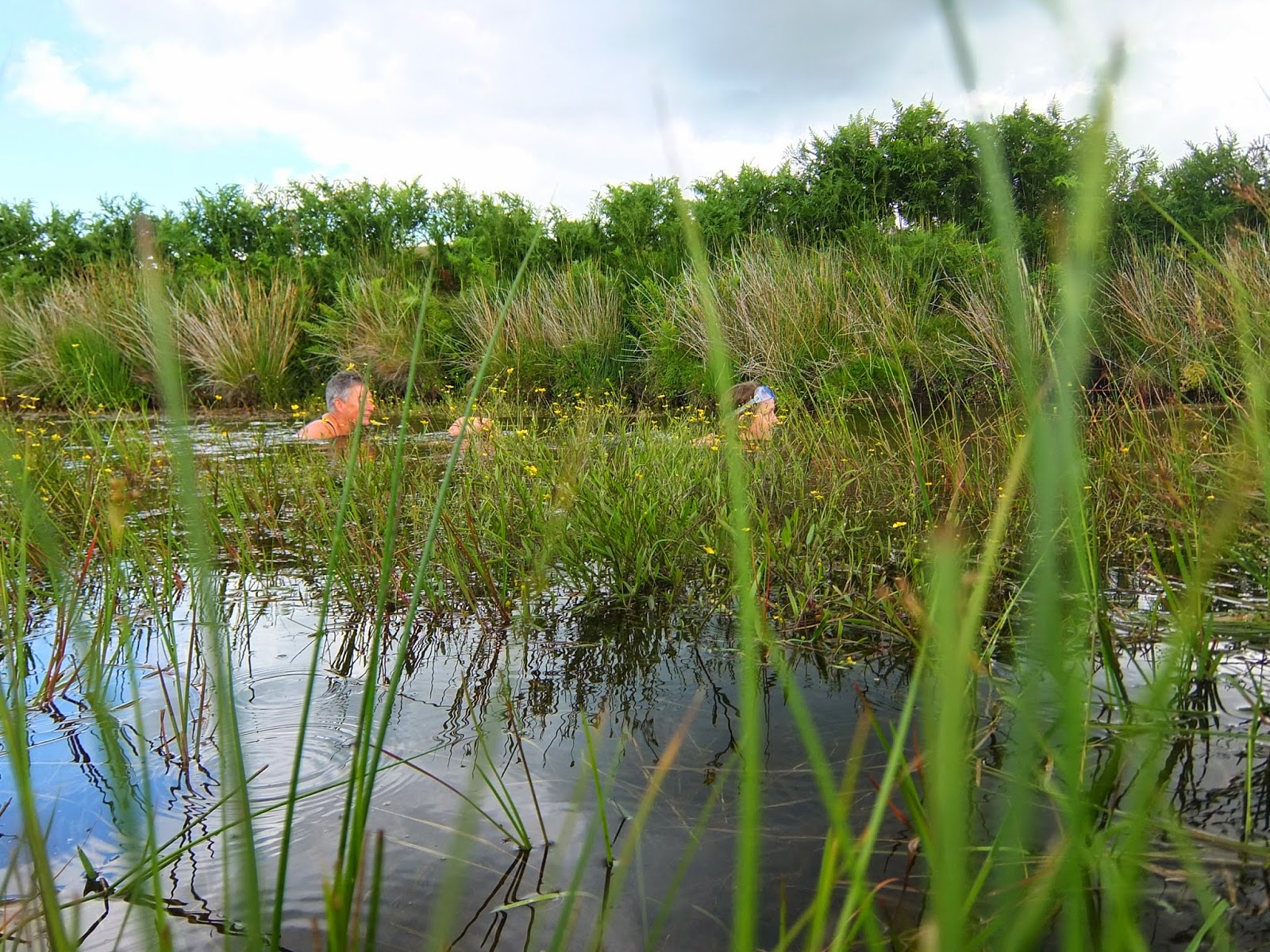 Have you ever tried bog swimming?  Well I can heartily recommend it.  We set off for Taw Marsh from Belstone, on the northern side of Dartmoor, in search of a ford where the river bends and there is apparently quite a large pool.   Well there's not been much rain in the last few months and when we got there the pool was, ahem, quite shallow. The river then meandered enticingly into the distance towards the mountains through reeds and flowers so after a bit of wallowing in the pool we decided to follow it upstream.   We felt like explorers going up a minuscule version of the Amazon.   We half swam, half crawled along, at nose level with the bank, the reeds, the spagnum moss and the odd foxglove....totally immersed in the boggy environment.  At this point I remembered I'd read somewhere there were leeches here.  Oh well, too late to worry now.   We carried on and then came to a deeper bit where we had another wallow, miniswim and chat, before pushing on into the heart of darkness (well that's what it felt like).  We were effectively swimming in a bog, but you have to remember this is not just any bog, it's a clean, clear, Dartmoor bog. 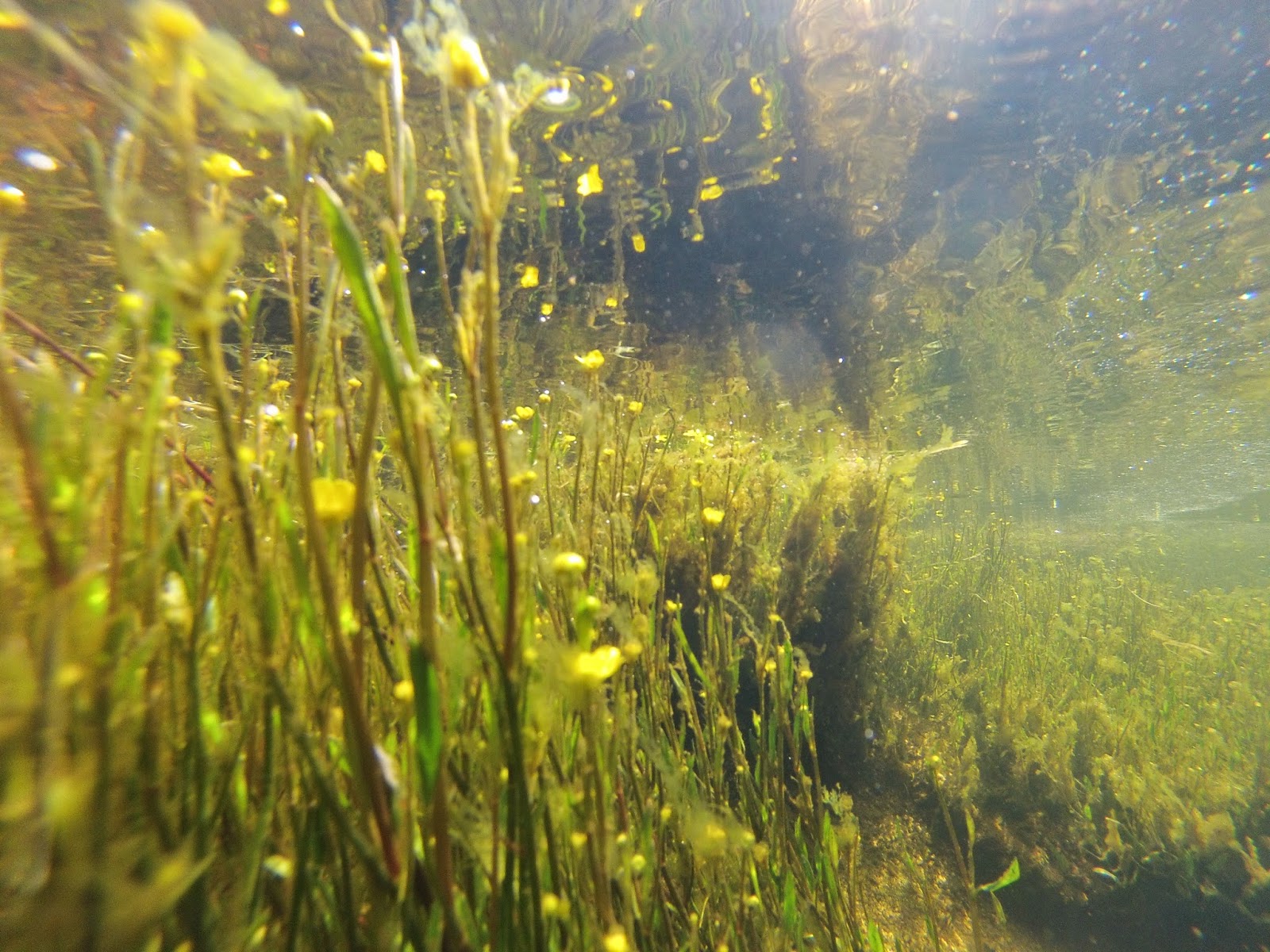 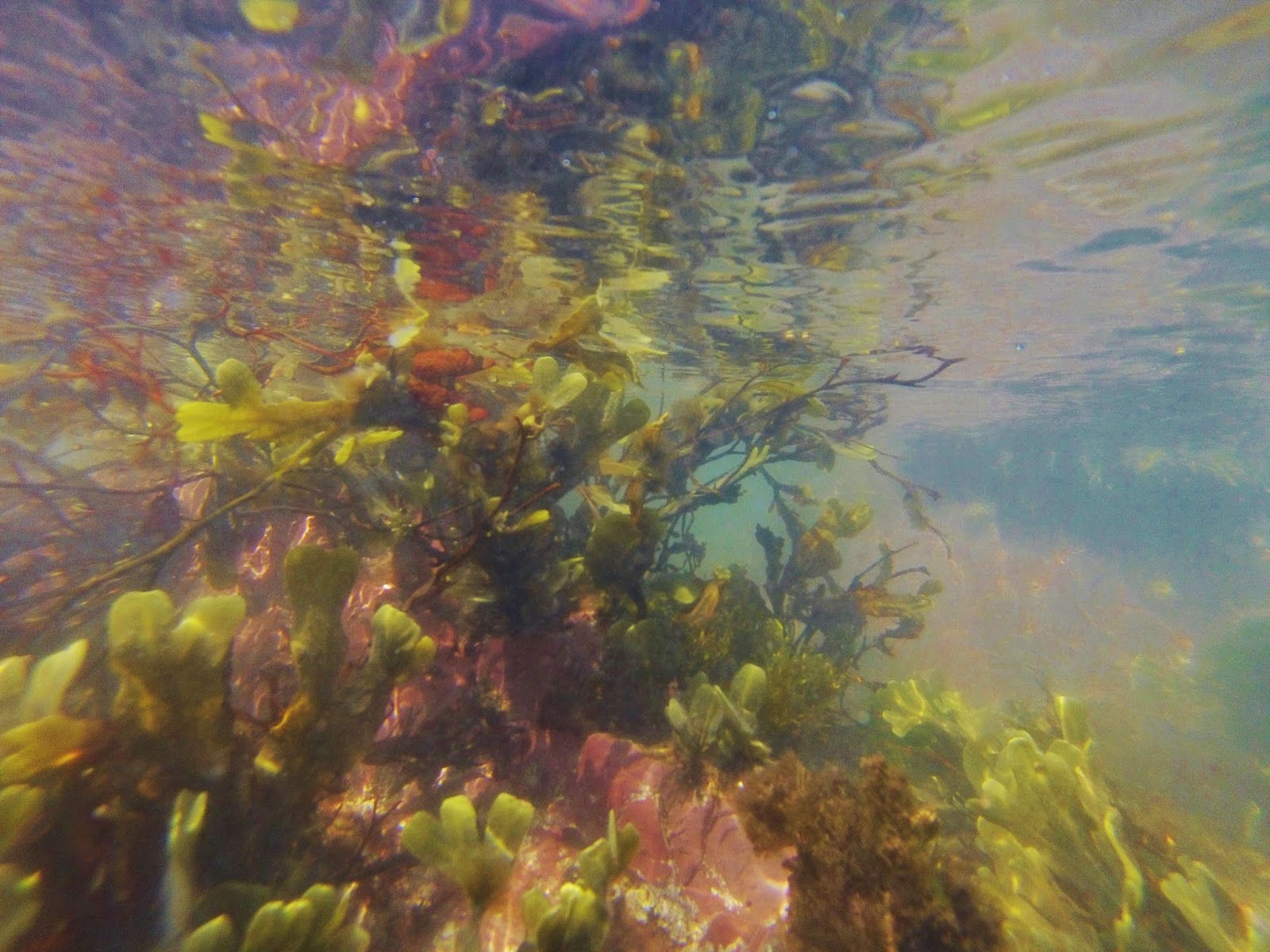 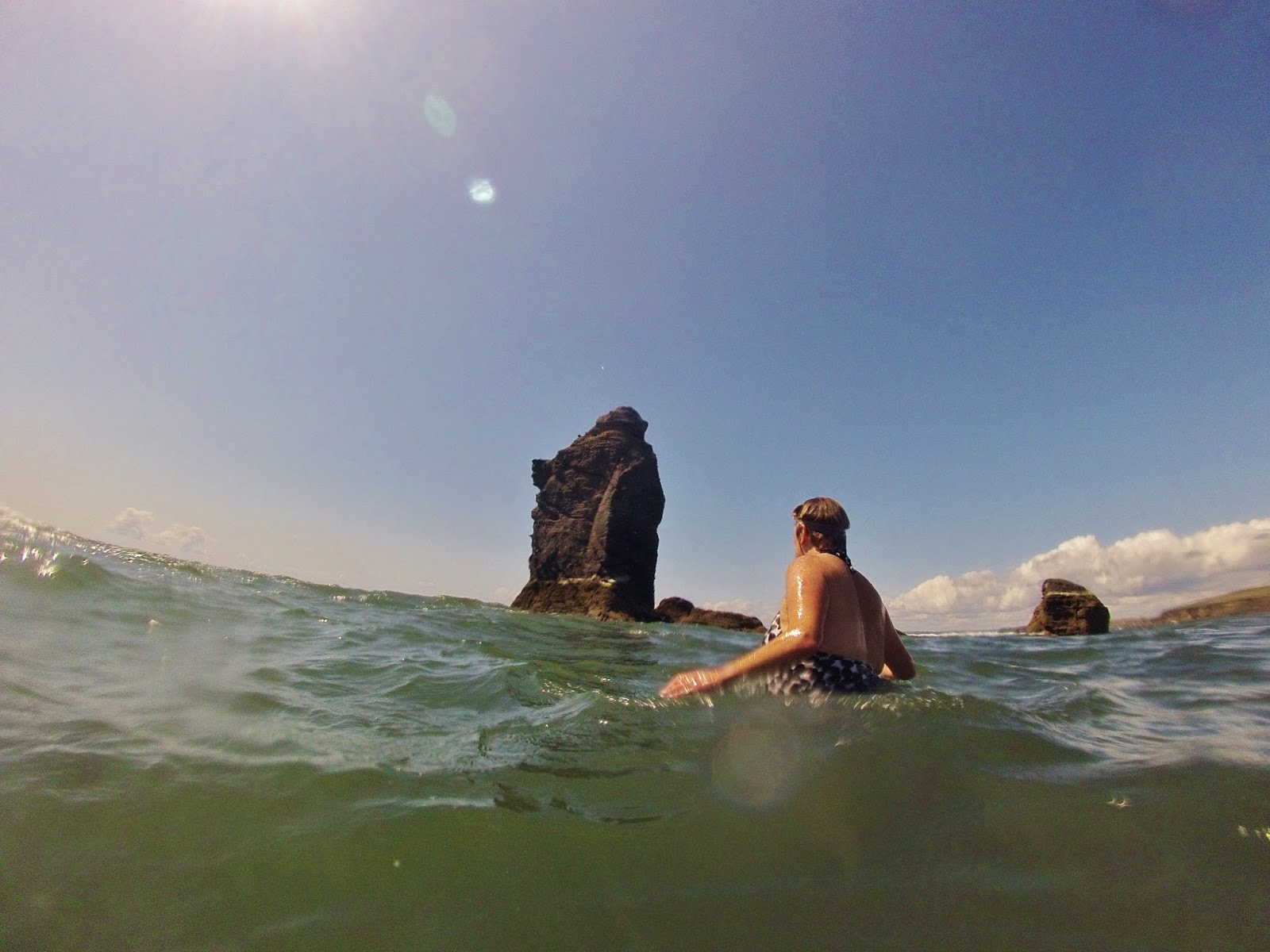 I've been in Morocco, dodging waves in the desert surf, so was looking forward to some calmer seas for swimming explorations back home.  I haven't been to Thurlestone Rock for ages, so Anna and I set off, planning to swim over the reef and out to the Arch.   I'd looked on the webcam, and all looked calm, but when we got there it was pretty lively, with a westerly wind creating white horses across the bay.   We got in to lovely lukewarm bathwater temperature sea, and swam around channels in the reef, admiring the seaweeds' coats of many colours before heading out the the Arch where it started to get quite lumpy.  The swell was exhilarating though and as it pushed me 'through the eye of the needle' it was just wonderfully exciting to be dwarfed by the majestic rock towering above me.  Once through I was in shadow, but swam around back into the sunlight to do the whole thing all over again. 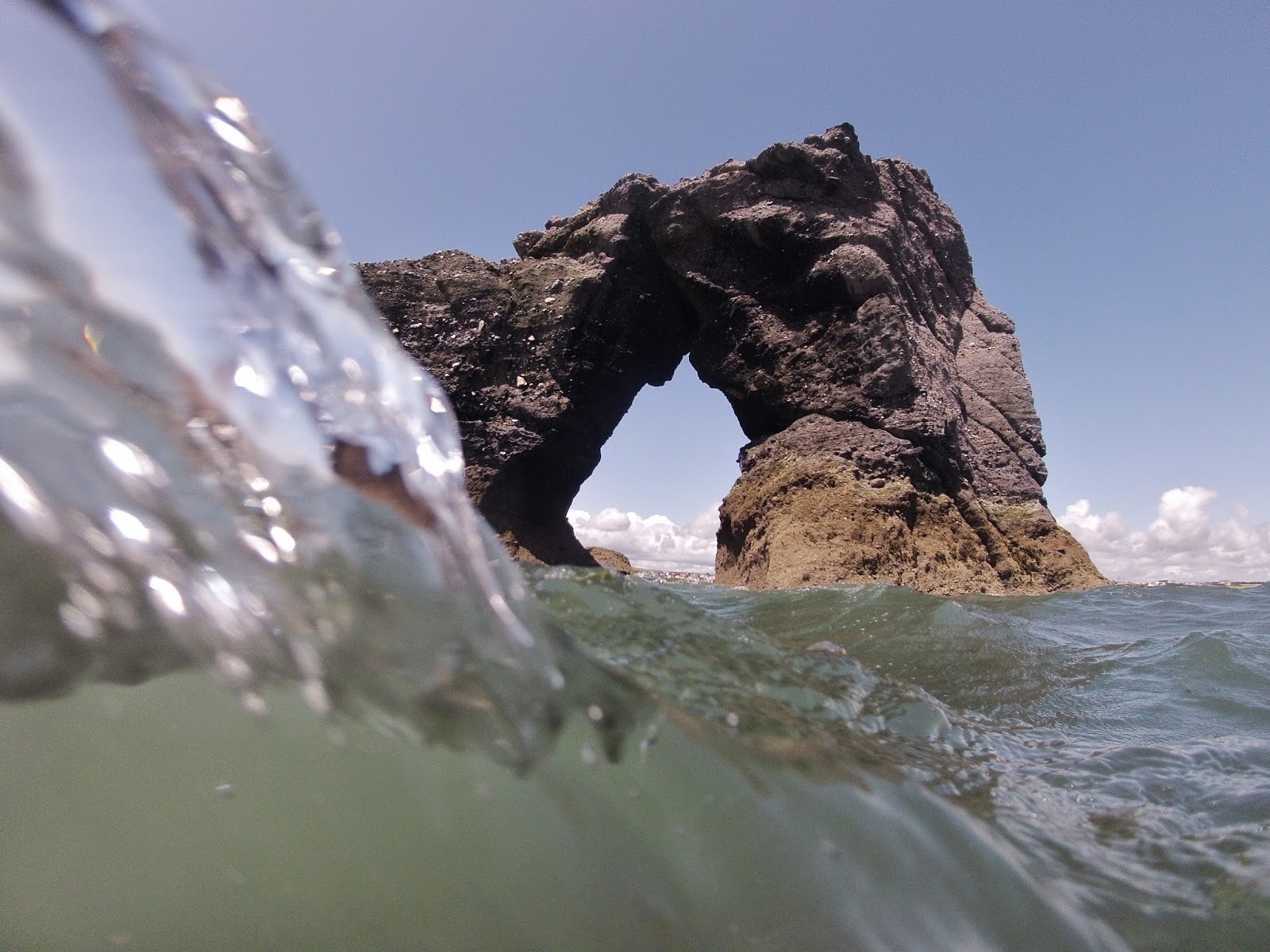 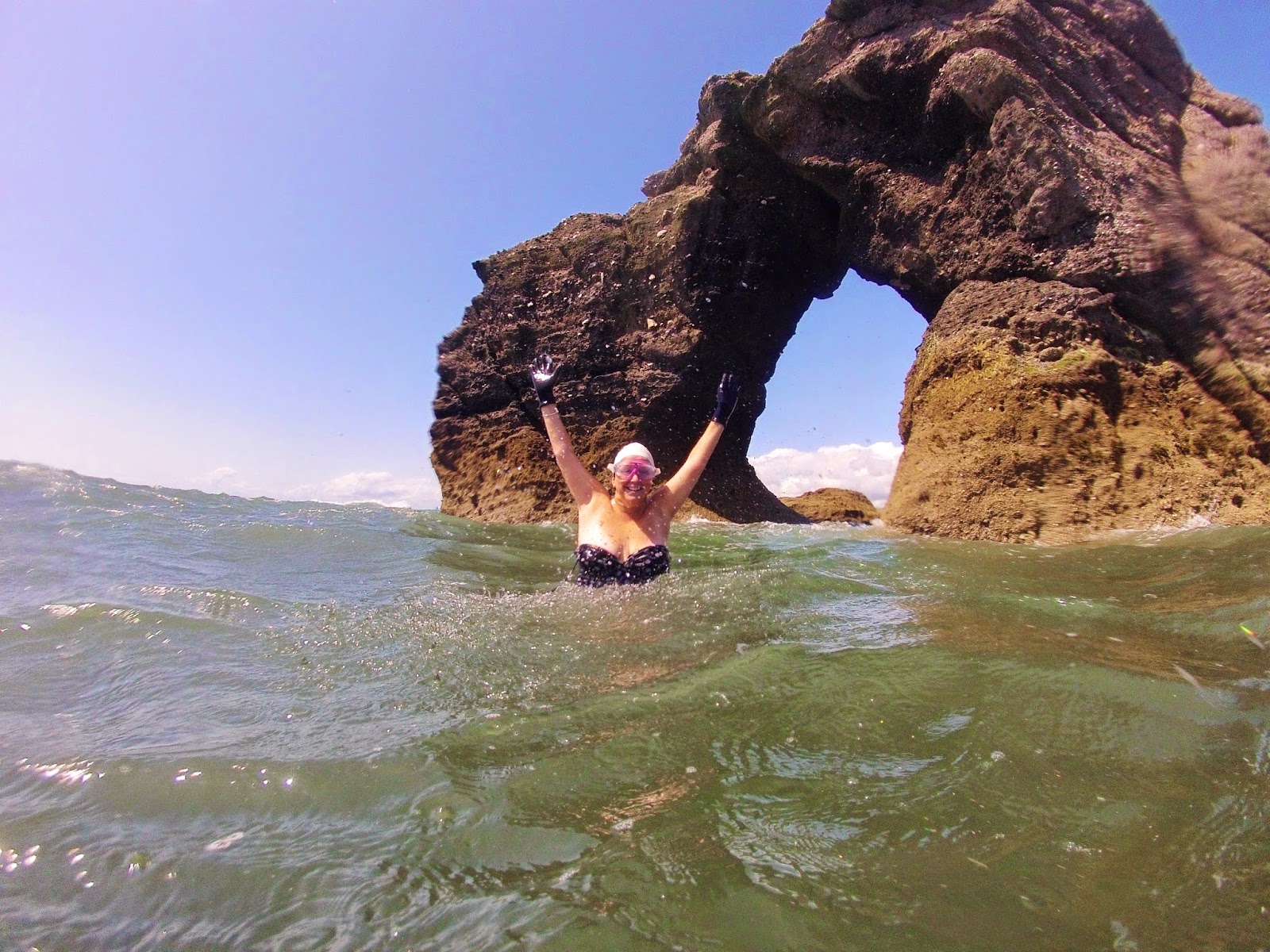