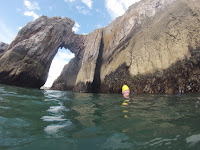 I love a really low tide.  It reveals rarely-seen marvels, and no more so than at London Bridge Natural Arch in Torquay.  When we arrived at the beach it looked as though someone had pulled the plug out.  The conditions were perfect, a calm blue sea, and as we approached London Bridge I spotted a 'new' cave - well more of a slit actually but exciting none the less -  that I'd never seen before because I've not swum here on such a low tide before.  Allan and I swam in and saw brilliantly outlandish Dead Men's Fingers, a form of soft coral that look more like Dead Men's, ahem, something elses, and then to our great excitement saw a beautiful array of pink life forms that we later discovered were Jewel Anemones.  We then swam on through the majestic arch, and into a double-entranced cave with more exotic marine wildlife including Elephant Hide Sponge and Devonshire Cup Corals. 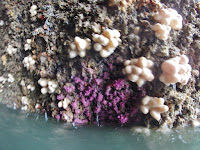